G is for Geography 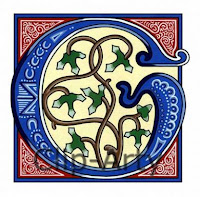 I know that the broad sentiment in the OSR, when it comes to the sandbox, is that there is no real need to create an entire world before a campaign starts. That the "defining" of the world grows organically from game session to game session.

This always sort of seemed like a sandbox "paradox" to me (apologies for the rhyming, it really wasn't intentional). Why? Because isn't a sandbox campaign supposed to let the players go anywhere at any time, and the GM is supposed to be ready for that?

I think what OSR pundits mean by sandbox, the true sandbox, is a combination of that organic, per-session creation and some pre-campaign/pre-game session preparation.

I personally always try to be prepared with at least a skeleton of what my campaign world includes. That means even just a couple sentences of what lies in areas across my world map. And I also try to be prepared with some random tables for monsters, landmarks, and events, as well as some plot hooks and scenarios for the players to come across. Whether they choose to follow any of these, and in what order, is up to them.

Player backgrounds, no matter how minimal, can also provide inspiration for hooks. And of course, the permutations of player choice and their subsequent actions (and the consequences of those actions) also provide fertile ground for new threads and patterns to emerge.

You have to do some preparation, you know? When someone says they're a totally "seat of the pants" GM, they usually do have something prepared beforehand, and are not really making every single thing up on the spot all the time. Sure there are some times when you have to do this, because you haven't had time to prepare. But this is the exception, not the norm. Are there GMs out there who do the on-the-fly type of GMing all the time? Sure. But I think they are not as prevalent in a pure sense, as many would have us believe.

OK, I know...I've strayed from just the topic of the campaign world and into the territory of campaign session prep. SORRY! You'll just have to deal. But they sort of go hand in hand, eh?

Ok the inevitable questions: how much of your campaign world do you prepare before a game starts? How do your worlds "grow?" Where do you get your inspiration for features of your world?

Me? I'm a hopeless stealer of ideas from books, movies, published game content, etc. But that's mostly because I don't have the time I used to when I was a kid. And like I said, I also have random tables for landmarks, things found on the road, etc.