It's summertime again, dear readers! It's hot and muggy where I am these days, and the illo above reflects my urge to take a dip in some refreshing water! I just hope Larry's cheesecake is waterproof, and won't melt in the hot summer sun!
I hope that summer will find me with some more time to at least get a few game sessions in during the hot months. What about you? Does the advent of summer signal a time of increased or decreased gaming for you?
Posted at 10:39 AM 0 comments 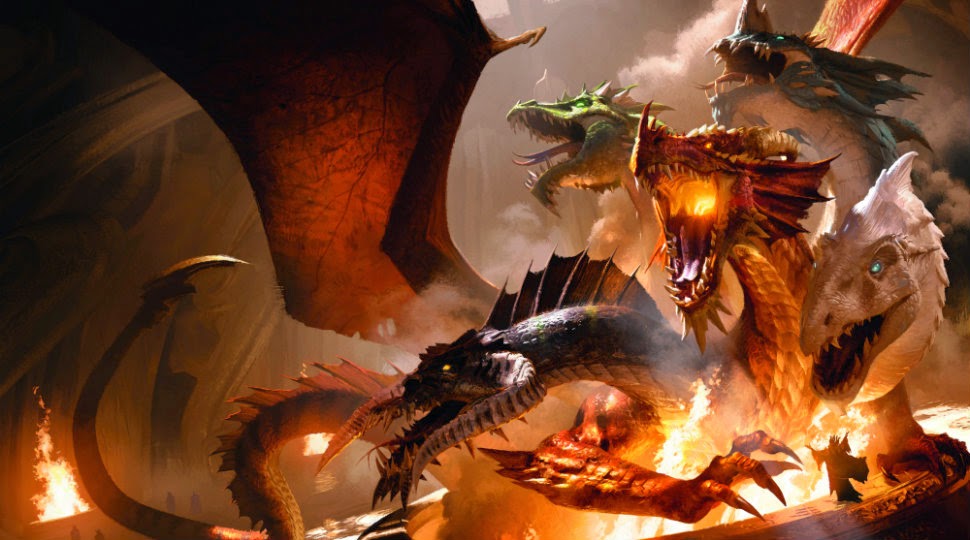 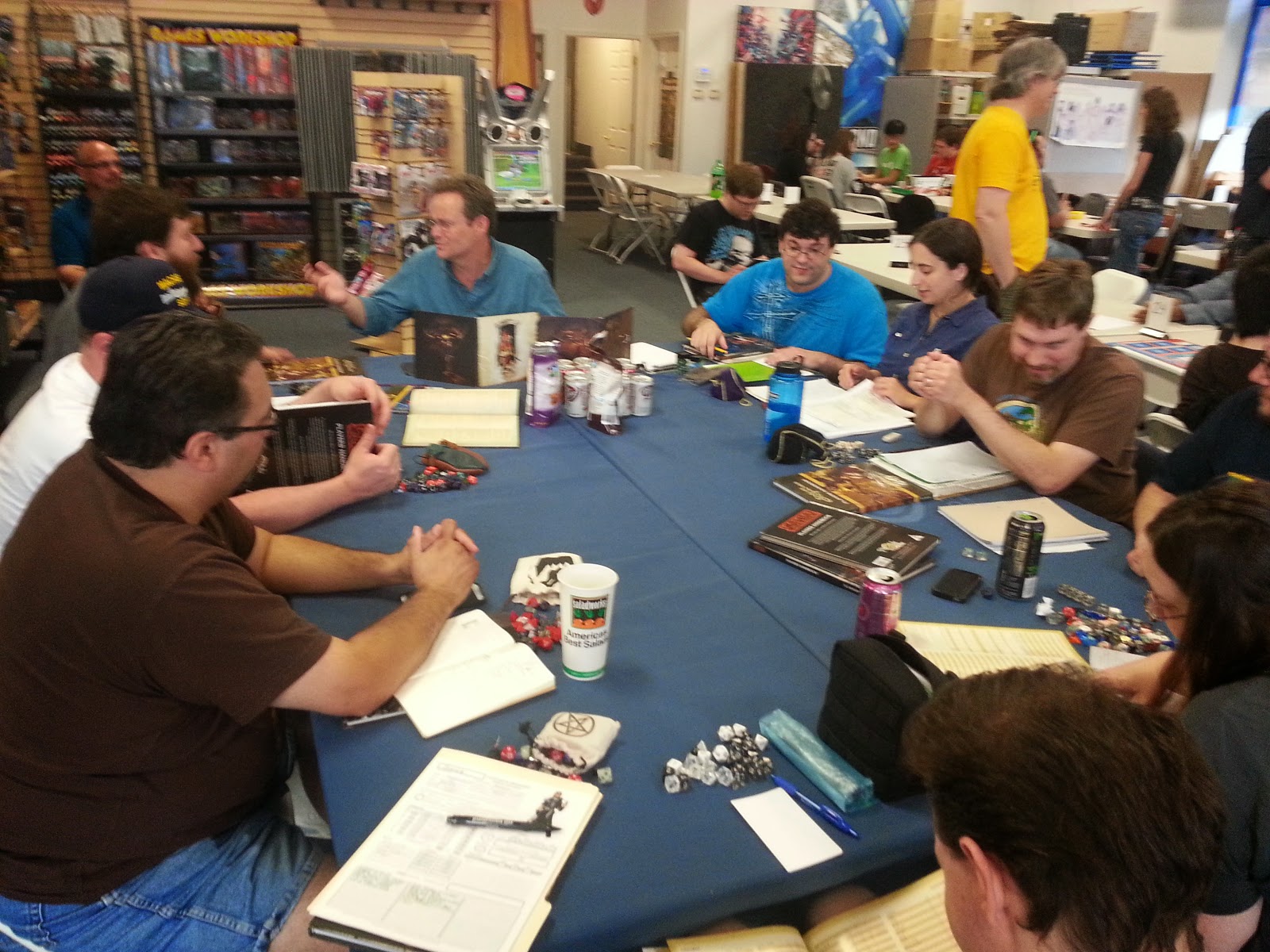 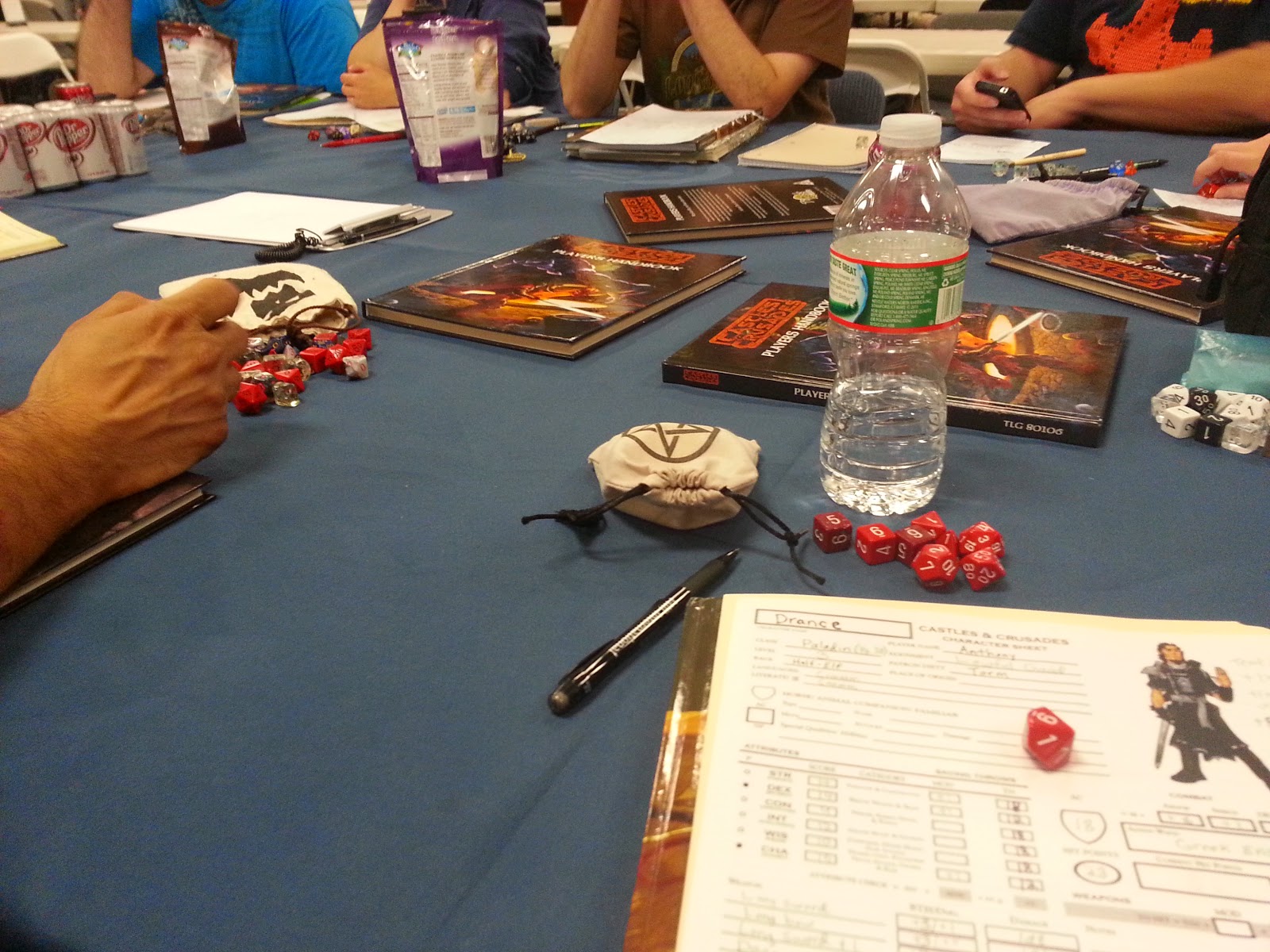 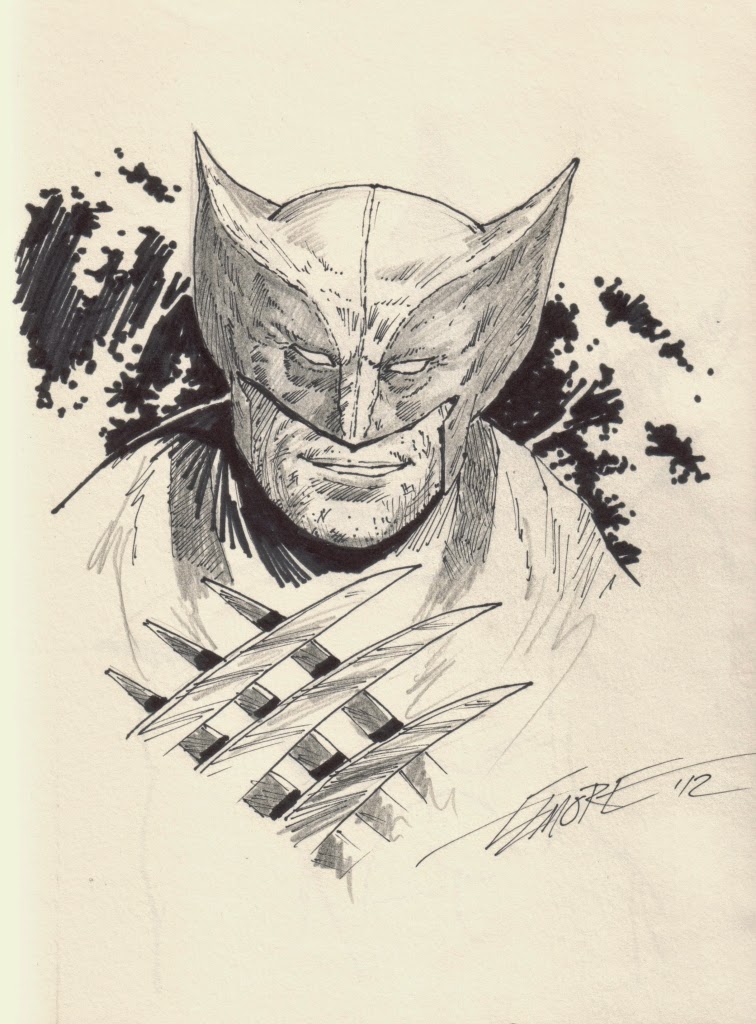 Well whaddaya know?! I was crusing the 'Net and saw that old Larry had done a treatment of Wolverine! No shite! Very nice! Sometimes, the Web has a cool surprise for you!
Posted at 10:49 AM 0 comments

Review: Talus and the Frozen King 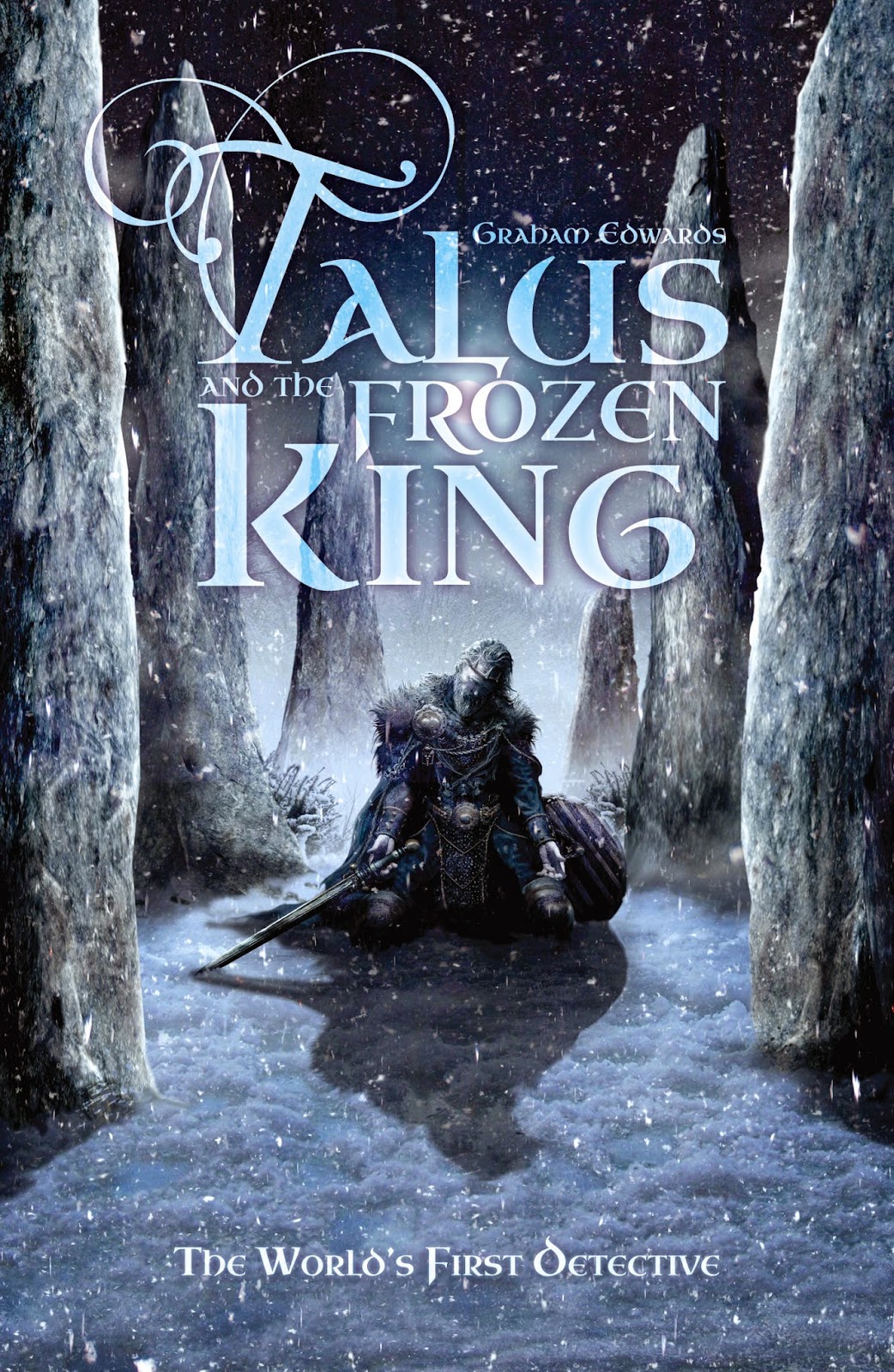 I'm about to break a cardinal rule when it comes to books, and I'm going to do a bit of cover-judging. BUT, not in the way you think. I'm going to reverse it, and judge the cover in relation to the book. The cover depicts a man in very Medieval-looking armor, with equally Medieval-looking sword and shield.
Why, you ask, is this a problem? Well, I'm not sure if the following is a spoiler, but here is your warning that the following may be a small spoiler in the minds of some readers:
The story is set in the Neolithic Age. That's right, we're dealing with characters who are not much beyond the cave man stage of human evolution. So, in the book, we see a lot of people wearing furs, wielding tools and weapons made of bone and stone, etc.
So, why the cover with the guy in the Medieval garb and with Medieval weaponry?! I'm going to guess that some marketing person decided that depicting Stone Age folks on the cover wouldn't grab the attention of readers. Well, I disagree. Actually, I believe the reverse would be true: I think many fantasy readers are tired of seeing another Medieval scene depicted on fantasy novel covers. If you threw some cave men on that cover, you might get MORE readers! Just a thought. Maybe if there's another printing, the cover can be changed to a truer reflection of the content of the book.
So, beyond what I thought was a poor choice of cover art, how was the book itself?
Well, I liked Edwards' concept of basically transplanting Sherlock Holmes into the Stone Age, right along with a Watson-esque partner. I also liked Edwards' turns of phrase; the man is very capable of creating vivid imagery.
In all, he definitely has the chops to write a good novel. I'm just not sure Talus and the Frozen Kind (hereafter referred to as TatFK) is that good novel. It seemed to be a fairly bog-standard mystery yarn. There's a king that is murdered, and that king has a lot of sons who might have motivation to kill him. Okay, not the most original idea I suppose.
There were a lot of characters, and Edwards made an effort to distinguish the sons of the king from one another. Talus himself is an inquisitive and talented bard who has the traits one might associate with someone who has preternatural powers of observation and deduction: Talus is "strange" and socially awkward. Love is a mystery to him, as are the passions that might make someone commit murder. Yes, by now we've all encountered the character of this sort, an outsider and observer of human experience who is quirky, perhaps even somewhere on the autistic spectrum (like Will Graham from the "Hannibal" TV show). So, his character isn't entirely original, but I still appreciated how Edwards depicted Talus.
What I did find interesting is the overarching quest that Talus and his partner Bran are pursuing. They come upon the mystery of the king's murder on their journey to a specific destination, and their motivation for finding said destination is intriguing. I found myself wishing the story had been focused more on their quest, rather than this stop-over in some obscure village to solve a king's murder. However, I can see how I, as the reader, needed to see Talus in action while simultaneously learning about the overarching quest.
Ultimately, I think Edwards is a good writer, but he's still in search of a plot that will be more engaging, and a world that is more fully fleshed out. I felt at times he might have depended too much on a "gee whiz" factor when it comes to his setting in the Neolithic. But that gee whiz will only get you so far. I'm not saying that the world of Talus doesn't have potential. It just needs more flesh on the bones, and perhaps Edwards can add said flesh in subsequent writings.
So, perhaps Edwards had a clever idea and just didn't execute it all that well. That's my overall opinion about the book: good concept, lackluster execution. But then again, I'm not the biggest fan of mystery novels, so I could also be biased against the plot of TatFK.
Speaking of genre, this book is in the sci-fi/fantasy category on the Barnes & Noble bookshelves. However, there wasn't anything overtly magical or fantastical in the novel. There are hints of the supernatural, but that could just be the perception and beliefs of the characters.
Bottom line: TatFK was a good quick read, a lighter bit of fiction that started out slow but picked up the pace as the story progressed. The plot was somewhat predictable and clunky in execution, but the author has an obvious talent for storytelling and vivid description. I would definitely try another novel by Graham Edwards, to see how his style evolves over time.

Oh, and he needs to insist on more accurate cover art! The mismatch between the cover and the content was jarring. Cover art may not be the reason one should buy a book, but good cover art that reflects the story well can enhance the experience of reading a novel. It also seemed like a blatant marketing ploy to lure fantasy fans into buying the book.
Posted at 9:55 AM 1 comments


Ugh, folks. Just ugh. I feel like the "snake arm" guy in the illo above: under the weather with a serious ailment. But instead of, er, snake arm syndrome, I've got a fever for success. It's taking up a good amount of time, but it's all worth it. I know I've been singing this same old song for some time now, but the price I'm paying for my current strivings has a sting that won't go away: I've had to all but eliminated my roleplaying time.

Anyway, just feeling a bit "lamenty" after a long and busy work week last week. I was so wrapped up in a deadline that I missed my Friday Elmore post last week. So, to rectify, here is my Elmore post for last Friday, the 13th no less! 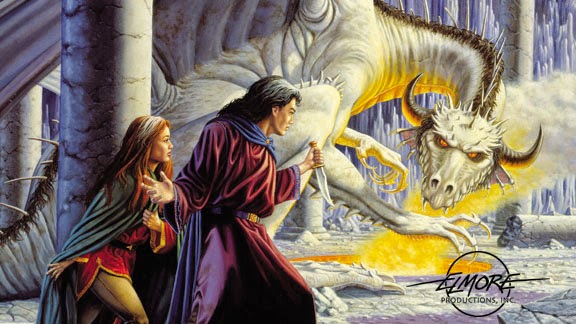 Well, Charles Akins has updated his Great Blog Roll Call for 2014! Last year, he described my blog as being mostly postings about art, with some posts here and there that went beyond just interesting RPG illustrations. Well, I guess he was mostly right!
I've struggled since the beginning of the blog (almost four years ago) to find time for substantive posts. I got back into the RPG hobby, for the most part, because of the blogosphere, but I really returned to the hobby in order to use my limited free time to PLAY, not to write about the game I want to play. Thus, my energies have never been truly focused on blogging.
Charles has updated his description of my blog, and given me some compliments, of which I wonder if I am deserving. Again, I'm not sure that many of my posts could be considered more than just musings on my return to the hobby, rather than things such as product reviews, new monsters and other creations, etc. (not that there's anything wrong with musing about one's life!)
But, I want to change that. I want to make more substantive posts. I hope to do so next week, with a post I've been working on regarding a different way to view D&D magic user classes, in the context of a campaign world.
Ultimately, I want to earn the kind words that you'll find written about my blog over at Dyvers!
Stay tuned!
Posted at 10:48 AM 0 comments