End-of-Year Art-ravaganza 2022: Chronicles of the Imperium 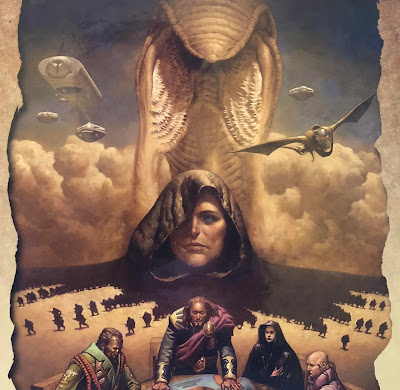 I have one of the few copies of the Dune: Chronicles of the Imperium that were printed in 2001 by the long-defunct Last Unicorn Games. As a perennial, some might say addicted, patron of RPGs, it was one of the many games I own but have never played. But considering that the game was so short-lived (Last Unicorn was purchased by WOTC and the game ceased production) there wasn't much support for the game at any rate.
The Last Unicorn version of the game was the first RPG based on the venerable sci-fi novel, and there wouldn't be another attempt at publishing a Dune RPG until the release of the similarly named Dune: Adventures in the Imperium almost 20 years later.
To be honest, I believe it takes a group of people similarly steeped in the lore of Dune to truly co-create a deep and fulfilling campaign. In 2022, with the proliferation of web-based roleplaying options, I think it is much more feasible to have such an experience than was possible in 2001. I'm considering running such an online game at some point, as I believe the version of the 2D20 system used by the recent Dune game lends itself well to the limitations of online play. In other words, the system seems to be flexible, intuitive, and "light" enough for online play (verses games with more crunch...not that you can't run crunchy games online...I personally don't have the time or patience to do so).
I'm looking forward to gaming in 2023 and beyond, in the world of Dune and elsewhere!
Posted at 3:26 PM 0 comments 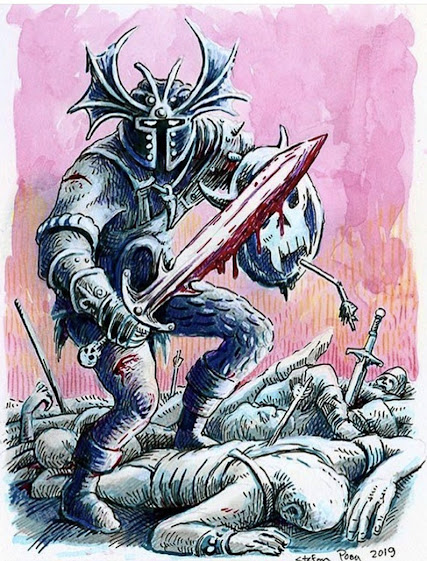 Love this version of Warduke by the great Stefan Poag! 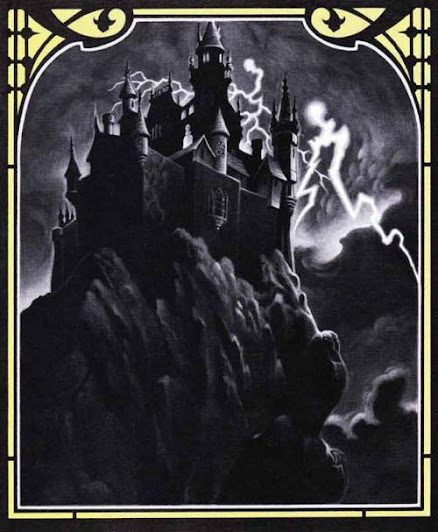 When I really got into Dungeons & Dragons back in the late 80's, the second edition of the game was ascending. It was the era of the big splashy settings. One of my favorites was the Ravenloft setting. Much of my admiration stemmed from the artwork, which was primarily the work of Stephen Fabian. His style seemed perfect for the setting, because it had an eerie, surreal quality that befit a realm of Gothic horror.
Posted at 5:39 PM 1 comments

Happy holiday season, folks! I ran a one-shot Alien RPG session (i.e. a Cinematic session) for a big group of my friends this past weekend, and we had a blast!

I don't know how much you know about the Alien RPG by Free League, but you may have heard about its d6 dice pool mechanic in combination with its Stress and Panic system. The rumors are true, people! The system at its foundation makes for an excellent recreation of an Alien movie! Things start out calm in the beginning, and by the end, there's mahem, madness, and death galore!

I wrote up my own Cinematic adventure and used some pregens from other Alien RPG products available for free on the Free League website. Most of the people in my group are experienced players, but there were a couple guys who were new to roleplaying. I was determined to keep things fun and flowing, trying to avoid looking up the more detailed rules of the system.

Basically, you need to roll 6s on your rolls to succeed. If you fail a roll, you can opt to reroll but you have to increase your Stress level by one. For each Stress level, you roll a Stress die. If a one comes up on the designated Stress dice, you have to roll on the Panic table. Hilarity and horror ensues!

My scenario centered on a ship called the Bettendorf, and the PCs were passengers paying to get away from Earth to find new opportunity on the Frontier of known space. The PCs all had their own agendas that spiced things up (such as the scientist PC constantly scheming to make "space cocaine"). The first act of the session involved them plotting and scheming while waiting to go into hypersleep for the 180 day journey ahead. They interacted with the NPC crew a bit, including discussion with the captain's 14-year-old son about the book Space Beast, written by the character Robert Morse in Alien 3, the lone convict survivor at the end of the movie. Little did the PCs know that the Bettendorf, a Wayland-Yutani science vessel, was carrying all sorts of deadly specimens...

Act 2 of the scenario started with the PCs being rudely awakened from hypersleep by the ship's XO, Ava. From there, they encountered mutated abominations like those encountered in the Prometheus movie, a facehugger, a bloodburster like the one encountered in Alien: Covenant, and of course a classic Xenomorph! Heck, there was a secret android among the crew who saw the humans as expendable thanks to Company orders!

By the time they were fighting the creatures, the PCs started dying horribly and losing their minds to Panic. Let's just say there was a lot of fear-induced paralysis, screaming, tremors, dropped weapons, and other bad things. Of the eight PCs only three survived: one officer, a drug-addicted pilot who was beaten to a pulp, and a roughneck/space trucker type who selfishly escaped in the Bettendorf's single lifeboat shuttle by himself (the lifeboat could accommodate seven people). The officer, beaten pilot, and the 14-year-old NPC were taken prisoner by a crew of soldiers in a passing Union of Progressive Peoples' patrol ship (or "space commies" as I called them during the session). These three were hauled off to a "space gulag," and the Bettendorf was left to float in space for the time being, until some unsuspecting fools decide to go salvage it...

All that fun was punctuated by a friendsgiving feast of turkey and other seasonal delights! All told, it was a great way to game in the holiday season!

Last December, I lamented about wanting to run a Barrowmaze campaign, and declared that "someday" I will see the look of apprehension in the faces of players!

That day has arrived! Yes, yes, I know that I've run bits of Barrowmaze before in other campaigns, but now I'm attempting an ongoing, at least once-a-month (twice a month if I can swing it), open-table style campaign. I'll run a session if there's at least two players (who will be able to run multiple characters). That's what happened this weekend: I had two players show up, and they ran two characters each, and also hired three retainers to supplement their numbers.

The players rolled up characters before the session, and I was able to explain some things to them before the session. So it was partly a session zero, which became a session "0.5" of sorts because we got some actual play in. I'll try to do a session recap soon! But in the meantime, I'm celebrating meeting some new players as well as bringing old friends into the mix. I'm also celebrating making my gaming aspirations a reality once again! 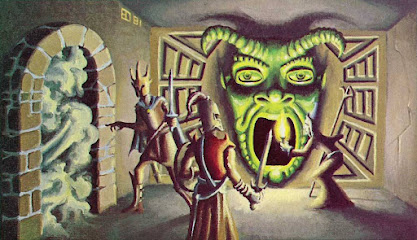 TL;DW(atch): It's up to both players and the GM (not just the GM) to ensure a great roleplaying experience! I encourage you to watch, Seth does some great videos about the roles and behaviors of players and GMs (warts and all).