So here I am sitting at my new desk at my new job! Pretty cool all around so far. I think I'll fit in nicely here...

I feel like I didn't even skip a beat between my old job and the new one! I feel like I didn't have any time off of work! I was out of work for approximately a total of three weeks. That's insane to me. I was truly blessed and lucky, because that is not typical of what most people who are laid off go through. And not to brag, but I had two job offers after only two weeks. I still can't believe it. I thank the powers that be in this nutty universe!

And, I actually find myself regretting that I didn't take more advantage of my time off. I really could have spent more time doing other things besides job hunting. I mean, I did spend some good quality time with the wife and kids, and caught up on some stuff around the house, but I probably could have done less worrying about the job stuff...ah well. No use crying and all that...

Anyway, I have set a target date of March 31st with my gaming buddies for our triumphant return to regular game sessions for my Tales of the Wanderers campaign (sorry, was that a really long sentence or is it just me?). Although I have a lot going on now with ramping up at the new gig, as well as a new bit of freelance work coming my way, I am trying to dedicate the spare time I have to getting my GM pants back on ;-)

D&D in the News: Salon.com Article

I can't write much right now, I'm in the midst of accepting job offers and writing some freelance web copy, etcetera. But a buddy of mine sent me a link to an article on Salon.com called "How Dungeons & Dragons Saved My Life." I haven't had a chance to read it thoroughly yet, but any press is good press, eh?

This sort of thing, just like the recent D&D episode of Community, is the reason that I laugh so loud when I read blog posts about the "impending doom" of D&D and/or the roleplaying hobby. I don't understand why some people can't recognize the sheer hubris of those "D&D is going extinct" predictions. Who are we, no matter how steeped in the RPG scene we may be, to declare such a demise?

Maybe I'm not a purist. Maybe I don't care what rules mechanic is behind the current in-print, brand name D&D product. The point is, I don't see any evidence to justify all the rantings of the doomsayers. They're the roleplaying world's equivalent of the guy on the street wearing a "The End is Near! Repent!" sandwich board. These "prophets" need to spend less time navel-gazing, and maybe they'll have more fun when it comes to the hobby. Just sayin'...
Posted at 10:00 AM 2 comments

Hey all, just wanted to check in really quick to thank you all for the well wishes and to give you a status update. I have a job offer on the table, and I am crossing my fingers that another one is on the horizon! I feel really good about myself at the moment, needless to say. I was determined not to become one of the many horror stories of this Second Great Depression.

I've also managed to land a pretty good freelance gig, as well. Getting laid off was one of the best things that could have happened to me at this moment in my life! I've been fortunate enough to make my living with words. I've been working in the old "word mine" all my life, and I don't intend to stop until they pry the keyboard from my cold, dead hands! ;-)

Anyway, to anyone out there that finds themselves unemployed or underemployed, I for one think there is hope. Just keep your spirits up, have faith, work hard, and network! Both of my interviews last week came from getting my resume to the right people. Things aren't as grim as they might at first appear...at least, I think so. If my experiences over the recent weeks is any indication, things are looking up.

Now, I am hoping that my good job-finding progress heralds a return to gaming in the near future! As soon as I get into a new job, I'll return with full gusto to the table-top, rest assured!

Thanks again, hang in there, and as always happy gaming!
Posted at 12:16 PM 2 comments

Hello again! So I have a job interview today and one tomorrow! Please keep me in your thoughts and send some positive vibes my way if you can spare them. The sooner I get a new job, the sooner I can stop talking about needing a job and get back to what's really important: gaming! Thanks!

P.S. To anyone else out there that might be struggling with unemployment: LinkedIn has been a life saver! Networking is the key to landing a gig, and LinkedIn has brought networking into the 21st century!
Posted at 10:53 AM 7 comments

So I am currently sitting at my old desk at my former employer for the last time...the desk is bare, and I am thinking about the last six years of my life that I spent here...lots of ups and downs in that time. At any rate, I left on very good terms, so they've allowed me a lot of time to print out portfolio materials, use their resources, etcetera. I am very grateful, and wish the company well.

But enough of that maudlin crap! I have gone full steam ahead on the job hunt, and I already have an interview coming up! Only three days in, and already I've got a great prospect. That's a personal record!

And in my spare moments, I am dreaming of the near future and my return to top gaming form! I've been sort of flailing lately with my campaign's setting and rules system, but recent events (and player opinion) have convinced me to gird the old loins and stay focused. So, the campaign will stay on Golarion for the nonce, and we will be shifting to Castles & Crusades. And I am determined that those will be the only major changes for a good, long while! In addition, I am making a concerted effort to fend off Gamer ADD, should it rear its ugly head again!

TrollCon East in Words and Pictures!

So, I'm taking a break from my job hunting (doing pretty well so far...got my updated resume together and I'm putting my networking skills into overdrive!), and I've downloaded some photos from my cellphone that I took at TrollCon East the other night.

Here's a shot of the mountain of C&C stuff the Trolls brought with them (every time I see this one I imagine a choir of angels singing): 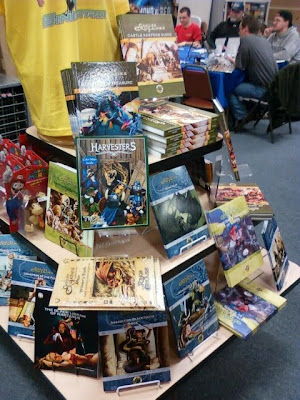 Yes, that is indeed a fat stack of Castle Keeper Guides at the top of that pyramid of awesomeness!

The next pic is a shot of the Troll Lord himself, Steve Chenault, serving as Castle Keeper at the head of the table! You can see he improvised a CK screen! I feel like in this shot Steve's saying "I'm coming for you next!" to a hapless player! 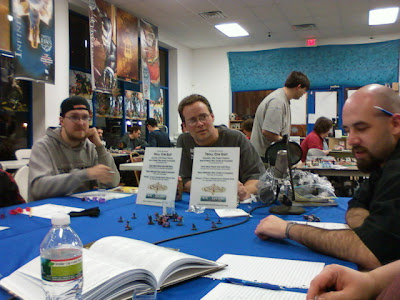 Actually, that can't be farther from the truth! Steve ran a great game on Saturday night (the night I attended the Con), and he was the epitome of the cool gamemaster! It really was a great experience to meet him and his fellow Troll, Tim Burns. Steve was outgoing and hilarious, and he never tired of talking to all of us about C&C as well as other stuff, such as how much he loves the Dogfights show on the History Channel, and how Arkansas and New Jersey share a connection because both states are the targets of a lot of jokes!

All in all, Steve and Tim were so down to earth. I could really tell they were so passionate about their game system, and roleplaying in general. The fact that they came all the way out to New Jersey for this relatively small Con is a testament to their dedication and appreciation of the people who love their system. I have to say, they've won me over! I was dabbling in the system before, but now I'm officially a C&C convert!

You can read the Troll's blog post here for a wrap up of the Con, as well as some some images. I'm in this particular photo (I'm all the way to the left of the shot, the guy with the dark hair in the green sweatshirt).

Anyway, once I get back on my feet with a new job, I'll definitely be converting my current campaign to C&C!
Posted at 8:52 PM 1 comments