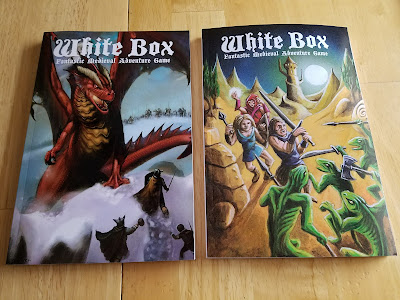 Yeah, this is a late Sunday edition of my EoW post (usually on Fridays). But it's worth it, because I ordered two copies of a little retroclone heartbreaker called *inhales deeply* White Box Fantastic Medieval Adventure Game.

Anyone who has watched/read my blog for a while knows I've cut way down on gaming and game blogging over the last couple years. This has mainly been due to my kids getting older and the accompanying increase in their extracurriculars, as well as the slow-and-steady implementation of plans to make a career change.

But damn, gaming is a part of my soul, man! I can't stay away! I have to dip back into the RPG well now and then, or I go MAD!

So, this past week I dipped back in...and caught wind of White Box: FMAG!

But thanks to my gamer ADD, White Box has gained pride-of-place (for now) in my fevered gamer's mind! I went online, did a quick bit of digging, and found out the game is currently on sale AT COST.

WHAT? Oh yeah! For about $10 I got two copies off Amazon! The image at the top of the post shows two of the three possible covers, with art by OSR darling Stefan Poag and a gent named Eric Lofgren.

As other OSR bloggers have pointed out, WB:FMAG contains sort of a "greatest hits" mishmash of aspects from other clones and puts them into a well-organized, tight layout. A welcome thing for this particular part-time gamer who doesn't have time to whip up his own heartbreaker, or to be a scholar of the intricacies of how the original clones and DIY gaming blogs have created subsequent waves of new clones...

(Note that Tenkar's Tavern called WB:FMAG an "excellent houserules/rewrite of Swords & Wizardry White Box," and who am I to argue with Erik?)

So, I read on the blog of WB:FMAG creator Charlie Mason that the current version of his game (which is Mr. Mason's riff on Swords & Wizardry) is only available until February 22nd. A new version is coming out this year, and will apparently be a complete overhaul. This includes a new name for the game.

I'm not sure why even the name is changing, but I'm sure there's good reason (perhaps legal?).

At any rate, I think it was well worth it to get under the wire before this current version goes away.
I've had an ambivalent relationship with original D&D and its clones. It has some appeal, but I've always preferred the Basic D&D versions of Moldvay and Mentzer.

And yet...there's a part of me that still plans on someday running a good old, gritty campaign using some variant of OD&D! When that happens, I have White Box as part of my arsenal! I really dig this little compact package that Mr. Mason has pulled together! Well done, sir! You have a fan in me!
Posted at 11:49 AM 0 comments 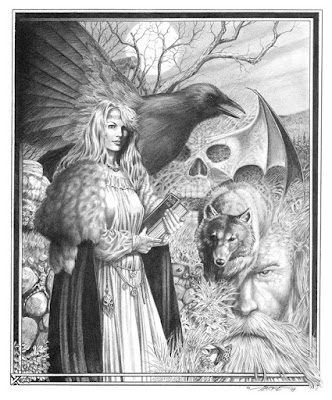 ...and a giant bird, a bat-winged skull, and a wolf coming out of a guy's face. Whoa, lay off the mushrooms next time, eh?
Posted at 4:03 PM 0 comments