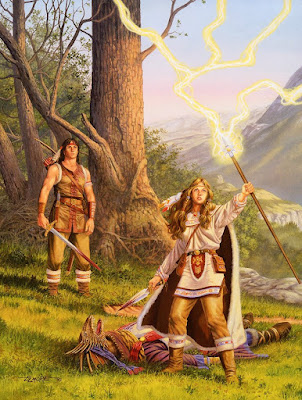 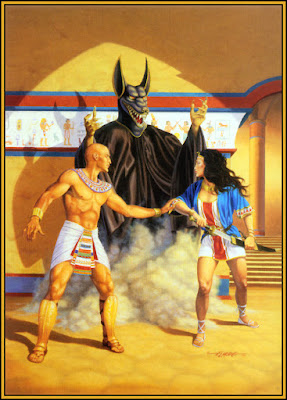 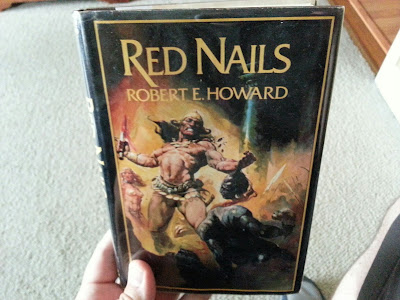 I love library book sales! My county's library system has a massive sale a couple times a year at the large main branch, and I always try to get there for at least a quick glance over the tables. And I usually find some treasure hidden there.

For instance, the annual summer sale just happened to be held this week, when I'm off between jobs. Low and behold, as I stopped by and perused, my eye fell upon the beauty pictured above: a collection of Howard tales, a book club edition from 1977.

Cover artist is Ken Kelly, of course. For a long time I mistook his work for that of Frazetta. As it turns out, that was for good reason: Kelly is the nephew of Frazetta's wife! So Kelly had access to study Frazetta's work pretty directly.

The book also has some interior art from Conan's Weird Tales days: 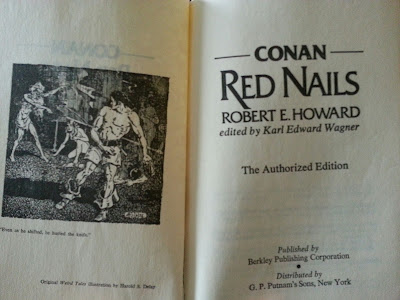 THAT'S RIGHT, you didn't read that wrong: this bad boy was edited by none other than Karl Edward Wagner!

And don't let the title fool you, there's more inside than Howard's great "Red Nails": 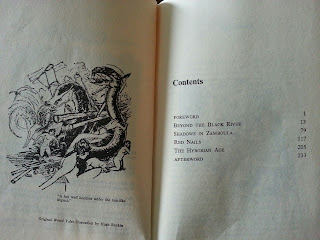 And check out the sweet map of Hyboria: 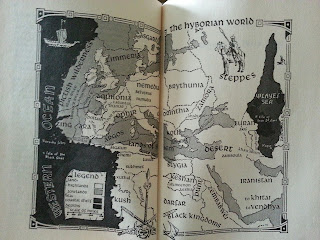 Just thought I'd share! Have you ever had a sweet score from an old book sale?

Have a great gaming weekend, all!
Posted at 2:17 PM 1 comments

I started this here blog on June 30, 2010 (damn, almost FIVE YEARS ago!), and at the time I was working in Center City Philadelphia. I had been missing roleplaying for years, and in my despair had started surfing the web looking for a sign, seeking a glimpse of the current state of the hobby I'd left behind years before.
I discovered the OSR, and the rest is, of course, history destiny! At the time, I didn't know how I was going to start actively roleplaying again, but I knew it was going to happen! I assumed it would be by gathering up some old friends who I used to roleplay with, back in my youth. And indeed, I ran a few sessions with some willing friends. But my old pals weren't as interested in gaming as I was, so it was back to the drawing board...
For the first time in my life, I tried gaming with strangers. Yes, in my youth I'd only gamed with friends, but now that was no longer a sufficient option. So, I found a group online and met with them for a basement Pathfinder session or two...which didn't end well. No harm, no foul, I was an old-school guy looking for a different experience than what they were offering.
There were no game stores in my home area at the time, so I began to despair of finding an outlet for my gaming desires. Then, serendipity struck: in early 2011 I was laid off from my Philly-based job. Little did I know the wonderful silver lining to that unhappy event. The Gaming Gods, it seems, work in benevolent ways. Because the next job I found was not far from a New Jersey game store I'd admired for years but which had always seemed too far away: All Things Fun in West Berlin, New Jersey. Now, I was able to easily get to the store after work!
All Things Fun was where I met the Troll Lords, first of all! Secondly, it is also where I met an incredible group of people with which I gamed, and ran my first fantasy RPG campaign in well over a decade. I had, after so long, finally achieved my goal of returning to a consistent schedule of roleplaying! For several years, I gamed on Wednesday nights and it was glorious!
But my close proximity to All Things Fun came with a big price: two jobs that I really haven't enjoyed all that much. Indeed, there have been numerous times over the last several years when the only bright spot in my work circumstances was being able to game on Wednesday nights.
But after a while, even roleplaying couldn't cure the fact that I was unhappy with my career trajectory. The line of work I semi-stumbled into after college (proposal writing) is definitely one of those jobs where burnout is an ever-present threat. Add to that a succession of horrible managers and boring subject matter, and I was beaten down by the whole experience.
So, I finally had enough of the work-misery, and decided I needed to rally and take conscious control of my career. Thus, in addition to working my day job, I've been working on the side to change my work-path. It's been a helluva journey, and I'm making slow but steady progress in chasing a more fulfilling career.
But, as I've lamented here, this effort has taken me away from active roleplaying. I haven't seen my old Wednesday night group for probably about a year...honestly, I can't remember the last time I gamed with them. And that makes me very sad indeed. But ultimately, my suffering under two less-than-inspiring/fulfilling work environments has been the much more pressing problem.
So, I've recently made a move to escape the misery: I've taken a new job that seems to be a much better and, more importantly, a happier fit for me. I'll still be writing proposals, but it will be for a much more interesting industry. And in the meantime, I'll still have time to work on my "side hustle" and keep getting closer to an entirely new career.
However, the new gig is another job in Philadelphia. Which means, no more close proximity to All Things Fun.
Ugh. It's the end of an era. A truly bitter-sweet end. I've had so many great nights gaming in this area, it's going to be so strange not to be close by anymore. But again, my general happiness is a better thing to have, when it comes down to it.
So, I'm writing this post on my last day at my old job. I think I'm going to make a pilgrimage to All Things Fun today, to tell them it's once again going to be harder for me to get to the store.
However, in the last year or so, a game store has opened up not far from my house. And, I've gamed now and then with a few new local friends. So I have local options now that I didn't have when I was last working in Philadelphia.
In the end, I know the Gaming Gods are always looking out for me, and they'll get me back to the table somehow. I'm looking forward to the adventure ahead, at the table and beyond!
P.S. Sorry if this seemed like one of those posts where a blogger tells you he's not going to be blogging anymore! I'm not quitting, though I know my output is so minimal these days it may seem like I've already quit the scene!﻿
Posted at 11:06 AM 2 comments