Just wanted to wish you, dear reader, a very happy New Year! May the coming 365-ish days bring you many excellent gaming opportunities! Fight on! 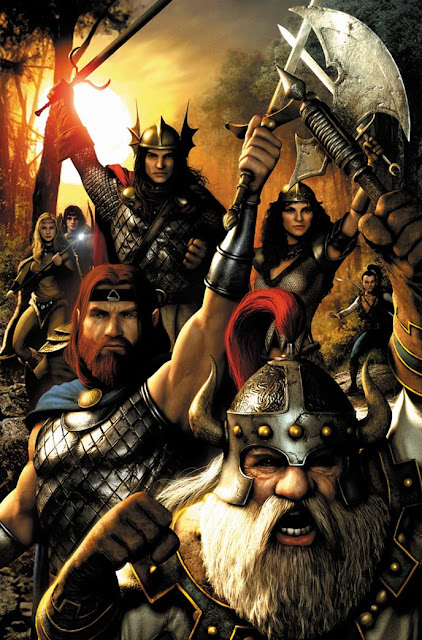 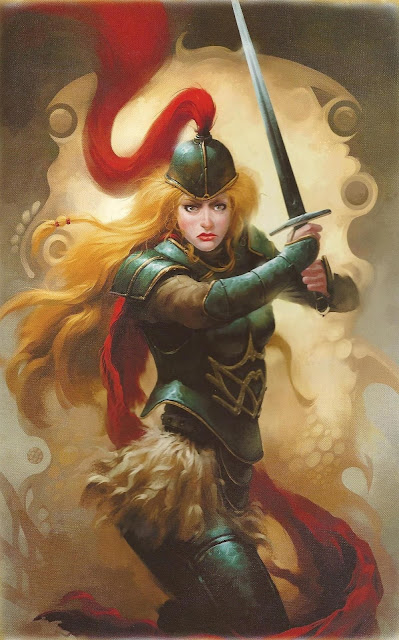 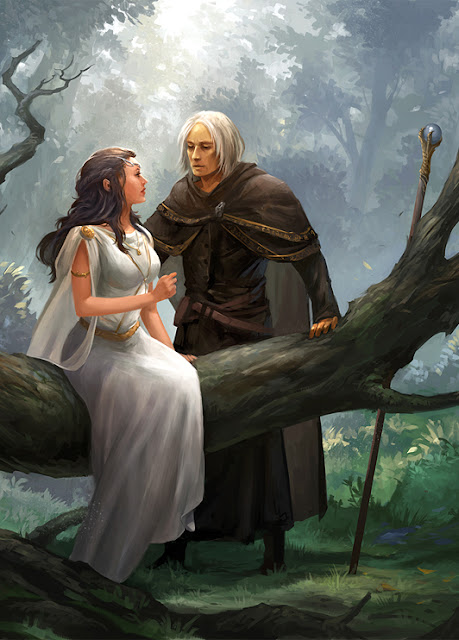 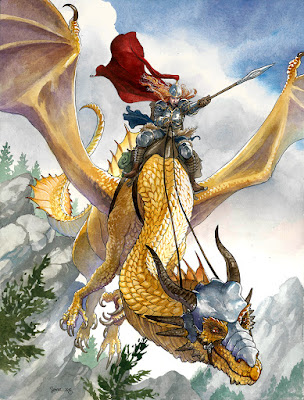 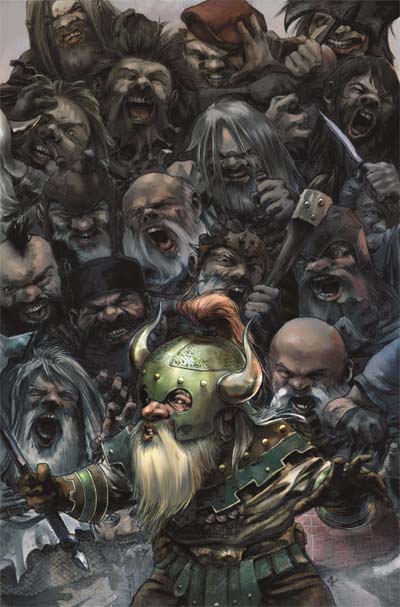 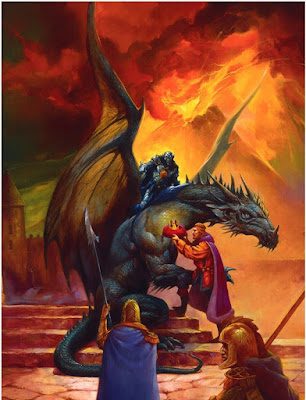 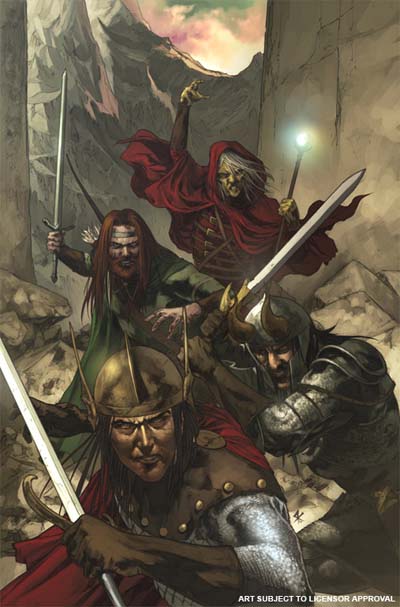 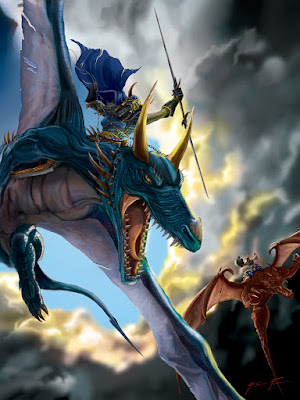 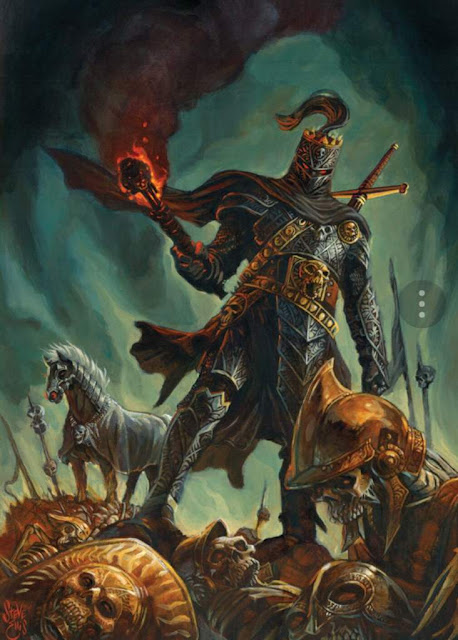 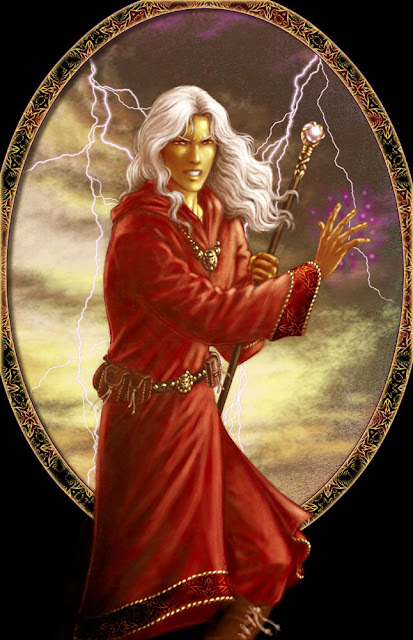 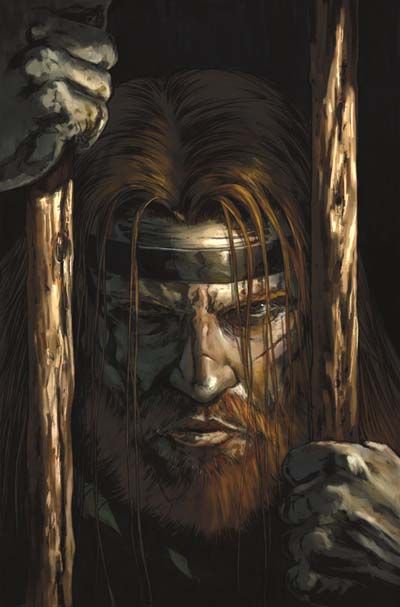 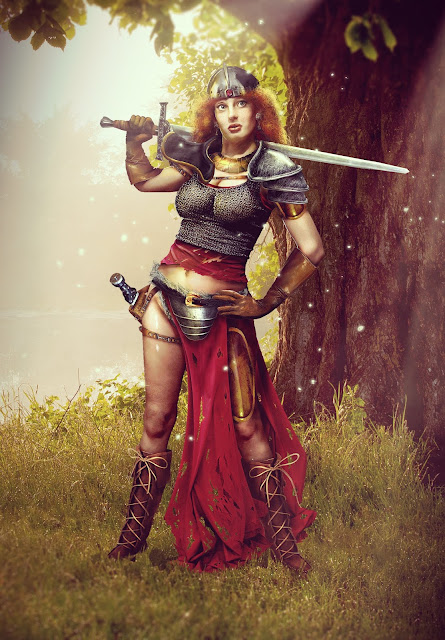 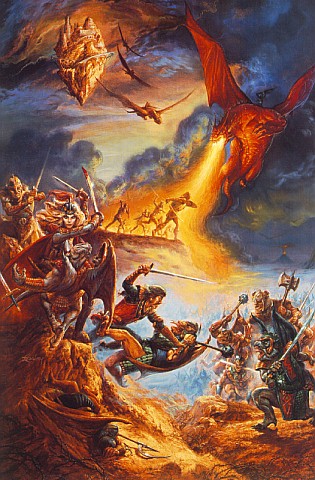 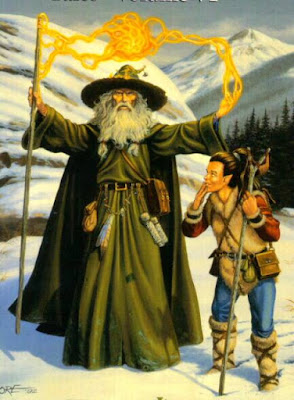 Dragonlance - After the Dawning: Adventure 1 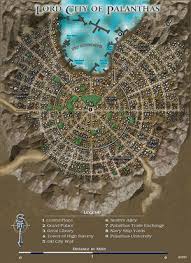 It is six months after the end of the War of the Lance, and Krynn is still recovering. Representatives of the free peoples of Ansalon are converging on Palanthas, perhaps the brightest beacon of light in a time of chaos and lingering darkness. Three such ready souls are Varhauth (a barbarian of the Qlettaar tribe in Estwilde played by Jim), Auger Tambac (a hill dwarf from the Palanthas foothills played by Jay), and Raph Knotwillow (a kender played by Dan).

These three companions head to the great southern gate of Palanthas, seeking to lend their aid to the post-war recovery efforts. They see a ramshackle settlement growing outside the shining white walls of the city, built by an ever-growing tide of refugees seeking sanctuary. The beleaguered Solamnic knights are doing their best to keep peace and order.

Our party encounter a group of knights outside the gate. The knights were stopping would-be adventurers and assigning tasks to them. The Solamnics included three young men who are no more than squires, but treated the characters with disdain and acted as haughty as if they had been with the order for years.

These young squires are put in their place by a veteran Knight of the Crown. This older knight then tells the characters they can earn ten steel pieces each if they can find some evidence of four missing merchant women who have not been seen for several days. The party agrees and looks for a place to settle in for the coming evening.

As the autumn sun sets, the three companions find themselves wandering the shantytown outside the walls. Suddenly, there are screams nearby. The party runs to find people being attacked by robed assailants. The three run into the fray and begin to fight. Soon, the identity of the attackers is revealed: draconians! The characters are able to dispatch three of the creatures. Several Solamnic knights arrive to investigate as the characters find a place to bed down for the night.

The next morning, they set out in the direction of the foothills. There were only two leads the knights were able to give them: the women had been headed to a hill dwarf village to sell some wares, and they were last seen being approached on the road by robed figures.

The party comes across some caves, and they're scaling a rubble-strewn hill when they knock loose some boulders. The sound of the rockfall brings an ogre out of one of the caves. The creature spots them and begins to throw boulders at them. They avoid getting crushed, and Varhauth bravely attacks the ogre. Auger joins him as another ogre comes out of a cave.

Raph does his part by running into the cave to investigate, and he finds several goblins crouched over the prone figures of four women! The kender is able to attack and kill one of the goblins, causing the rest to rush him. Raph discovers that the two caves are connected, and decides to use that to his advantage. He begins to lead the humanoids on a chase, running out and through the legs of the ogres, causing distractions and disorder. The party is able to dispatch the creatures and rescue the women.

The characters bring the women back to Palanthas and turn them over to the knights. The party gets their steel, and the session comes to an end!
Posted at 1:13 AM 0 comments

Dragonlance - After the Dawning: Introduction 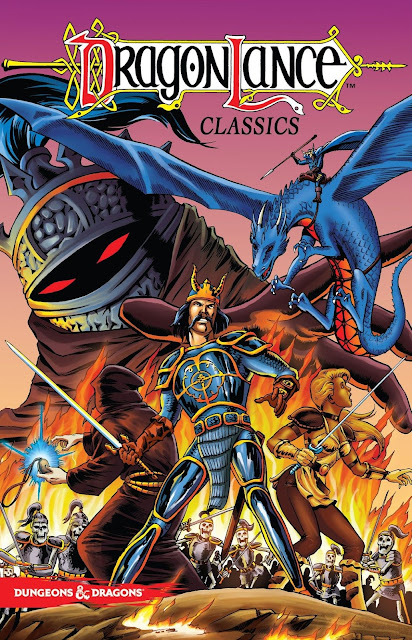 I've waited a long time to get a proper Dragonlance campaign started. I tried once years ago (in OMG 2011!), but it never panned out. A big reason for that abortive start is my own rampant gamer ADD (with which I still struggle to this very day). But also, I remember feeling that I wanted to run the campaign with old friends, those who were around in my youth when I was in my roleplaying heyday and formed my deep and abiding love for Dragonlance through the novels.

Now, it seems that day has come, finally! I have reunited with my old friends at the gaming table, and we roleplay as much as busy adults can these days! I'm using the excellent Castles & Crusades rules for the campaign. I may use the Obsidian Portal page I created for the campaign almost nine years ago (!) if I can find the time and the energy (getting...old).

The campaign starts six months after the end of the War of the Lance (in the year 353 AC). The characters are a cross-section of the free peoples of Ansalon. Those of strong will and body have been called to Palanthas to aid the resurgent Solamnic knights in restoring peace and order to the world.

This should be fun! Can't wait to share what we're doing on Krynn! Onward!
Posted at 1:35 PM 0 comments 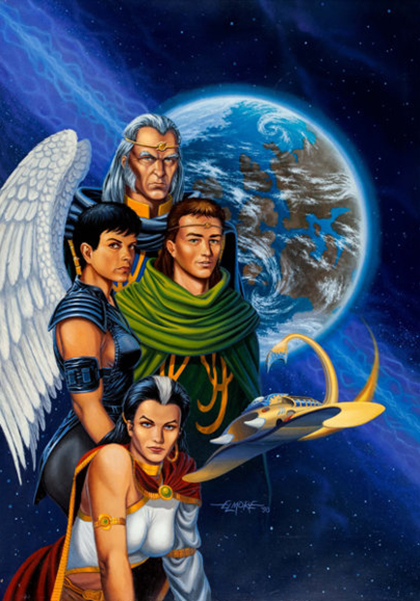 Happy holidays to one an all! Here's a nice Elmore illo of an angel with some...interesting folks and a...space ship? Over a place that...isn't earth? Ah well, happy holidays anyway!
Posted at 8:48 AM 0 comments 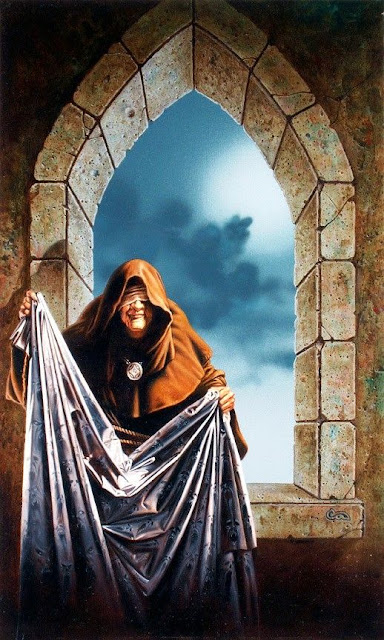 "Tapestry of Dark Souls" by Clyde Caldwell
Posted at 9:01 AM 0 comments 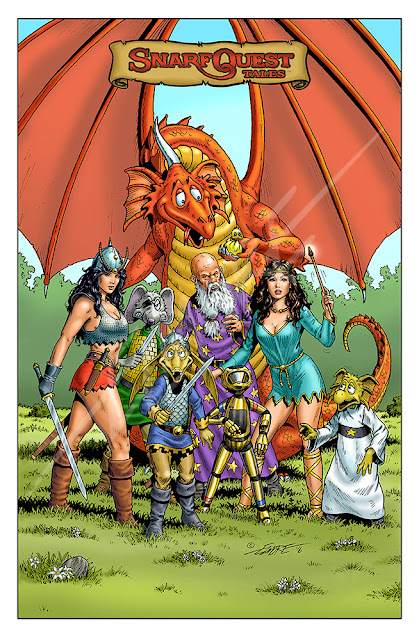