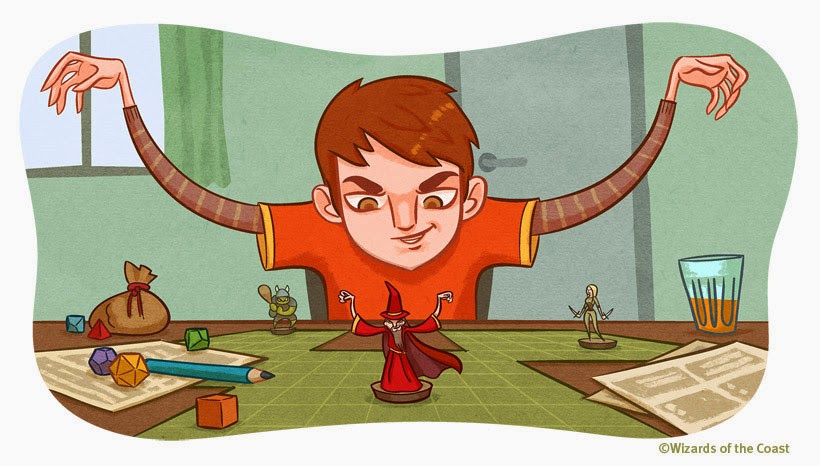 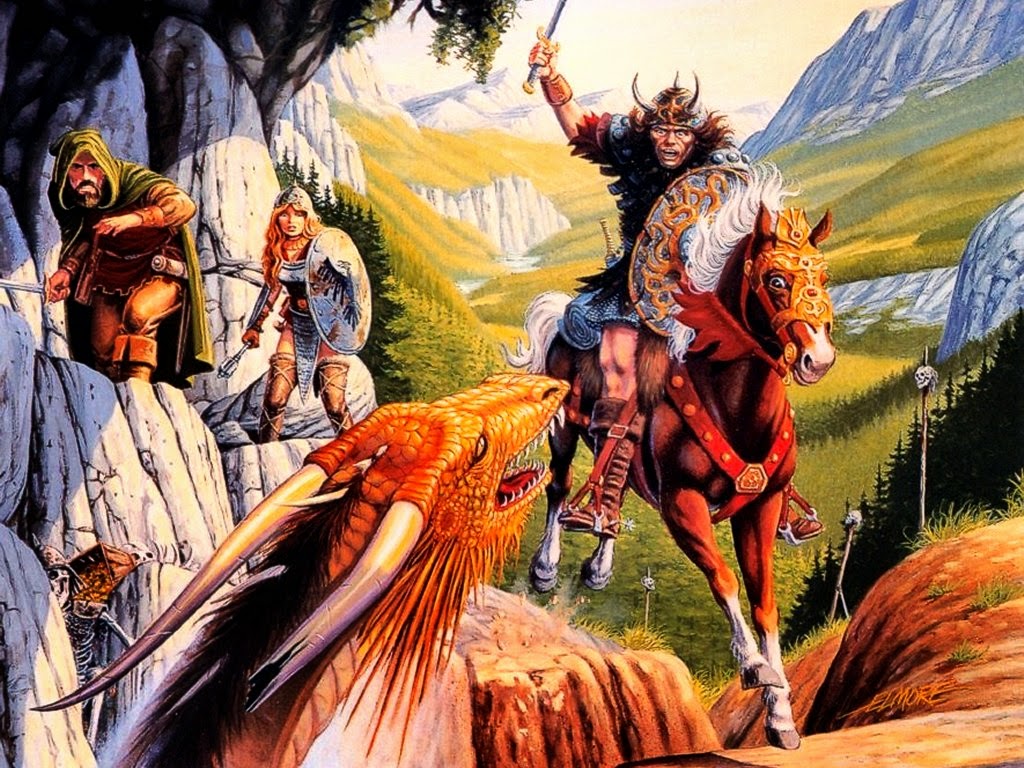 Love this illo! But it makes me miss roleplaying. *sigh* But all is not gloom! I've purchased the Dungeon! board game recently and have played it with the family! The kids liked it a lot, my wife a bit less (she's not a big gamer). Once we play a couple more times, I'll let you know more about our misadventures with the game.
So far, we've only played Dungeon! once. The kids haven't commented yet about the difference between actual roleplaying and playing a board game that is basically a "watered-down dungeon crawl." But I'm sure that the difference will become clearer and clearer as time goes on.
Well, that's all I gots for you today, kids. Have a great weekend! If you're getting up to some gaming, roll some polys for yours truly.
Posted at 12:25 PM 4 comments 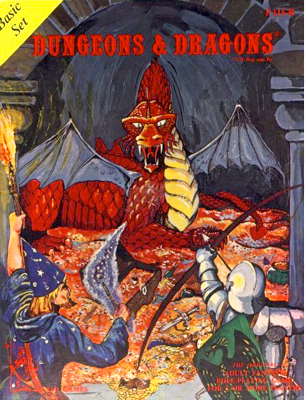 In Defense of Dungeons & Dragons 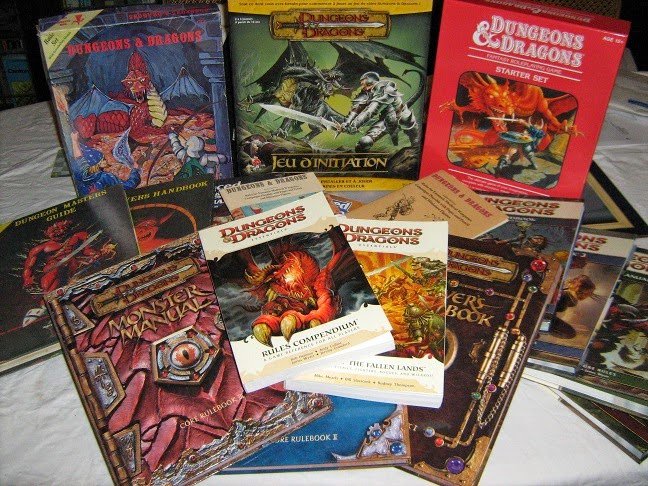 Last month, I wrote a post that gave a hint as to what I've been doing instead of roleplaying these days: I'm working on my burgeoning life as a personal development coach. It's something I've already been doing for most of my life. I've just decided to make it "official."
And I've been giving props to my roleplaying career for shaping the well-rounded, responsible adult I am today. Here's my most direct reference yet (on my personal development blog) to D&D and its influence on me and the world beyond the gaming table:
In Defense of Dungeons & Dragons
That post actually started as a speech I gave at my Toastmasters club. I hope to give this speech in other venues in the future. I feel honored to add my voice to the chorus of folks who have put D&D in the spotlight this year, the 40th anniversary of the grand old game.
I welcome your feedback, and your continued readership, of both my blogs. If you like my other blog, please consider following me there, and keep checking in on me!
Posted at 8:50 AM 0 comments

Debunking Dragonlance Misconceptions: Kender don't have to be stupid 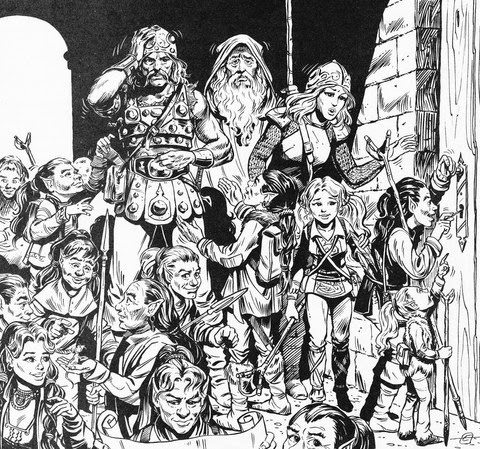 And by stupid, I mean lame. Kender don't have to be lame. Particularly as a PC race.

Every kender doesn't have to be as vapid as Tasslehoff Burrfoot always seemed to be. Hell, every kender doesn't have to be Tasslehoff Burrfoot, period. But I think that's the prevailing perception.
I'm continually dumbfounded whenever I encounter the paradoxical thinking process of some gamers. There are gamers that spout off about how roleplaying is not about slavishly following rules, but rather about treating published rules as guidelines rather than strictures.
AND YET, I've heard the same gamers complain about the "problems" of this or that PC race.
Folks, if you don't like something about the rules pertaining to a race, change it. It's just more rules to be used as needed, bent to your whim, etc.
So, let's apply this to kender. If you don't want them to be giggling, air-headed kleptomaniacs in your game, then they don't have to be.
I can't be the only person who has figured this out. Why do I have to explain house ruling to you guys?
So, what do you want your kender to be like? And by extension, how else does YOUR version of Krynn differ in your games from what's depicted in the published fiction?
Are your kender capable of the entire range of personalities, from happy-go-lucky to dark and brooding?
Do your kender barely have an urge to "acquire" objects, unlike the light-fingered filching freaks they are sometimes made out to be in the novels?
Make them your own, for the love of Paladine! Stop whining about their foibles and, uh, change what you don't like. Work with players who want to be kender, and (wow, concept here) ask THEM how they want their kender to behave. And let them play the little bastard that way.

Picture kender as ruthless villains, aloof assassins, whatever. Make them painfully conscious of their race's genetic urge to pilfer objects, and make them DESPISE the impulse, which they cannot control.

Margaret Weis and Tracy Hickman are not going to sue you for messing with the kender stereotype, I promise.

Now get out of here, and play kender YOUR way.

Some Dragonlance love on the blogosphere at io9!

So, as I predicted this past Friday, my wacky brain has shifted direction once again when it comes to choice of campaign setting for my next stint as GM (whenever the heck that would actually happen).
Yes, I've swung back to Dragonlance. And a voice welled up inside of me to scold me on the subject, saying: "Hey stunad, didn't you promise in a post last October to make your blog a bastion of Dragonlance love for the OSR crowd?"
(note: those readers of non-Italian descent may have to Google the term "stunad")
Why yes, I replied to that inner voice, I did indeed state such an intention, and have been found sorely lacking. Hand me the hair shirt, my penance shall begin anon.
Ahem. ANYway...I think it's time again for me to revisit that intention. To that end, I did some web surfing on the subject, and came upon this interesting bit of Dragonlance love over at i09:
Why Dragonlance should be the next fantasy film franchise

An interesting read, but I'm not holding my breath of course.

So, please excuse me while I go get my Dragonlance mojo worked up. See you on Krynn, folks.

The famous Medieval tapestry above provides a visual for what's been running through my mind for the last week.
The last two "End-of-Week" posts on this blog discussed my thoughts regarding running campaigns in either the world of Fafhrd and the Grey Mouser or the world of Conan the barbarian.
Over the last week, my whimsical and ever-shifting mind migrated to thoughts of running a campaign set in some alternate version of the real-world Middle Ages.
So, of course, I ran out to the library and gathered up some source material. Of particular interest to me are the years around the year 1000. And coincidentally, there are several books I found that discuss life and events around that particular millennial milestone. These books include The Last Apocalypse by James Reston, Jr. Just the title makes my mind swirl with possibilities: a campaign that takes place in the years just before 1000 A.D., an Earth where magic has been a very real force, and God and the Devil are just as real.
Well, enough of that for now. Who knows what the next week will bring to my fevered brain! Until then, happy gaming, dear readers!
Posted at 10:07 AM 0 comments

Update on Dark Dungeons: The Movie 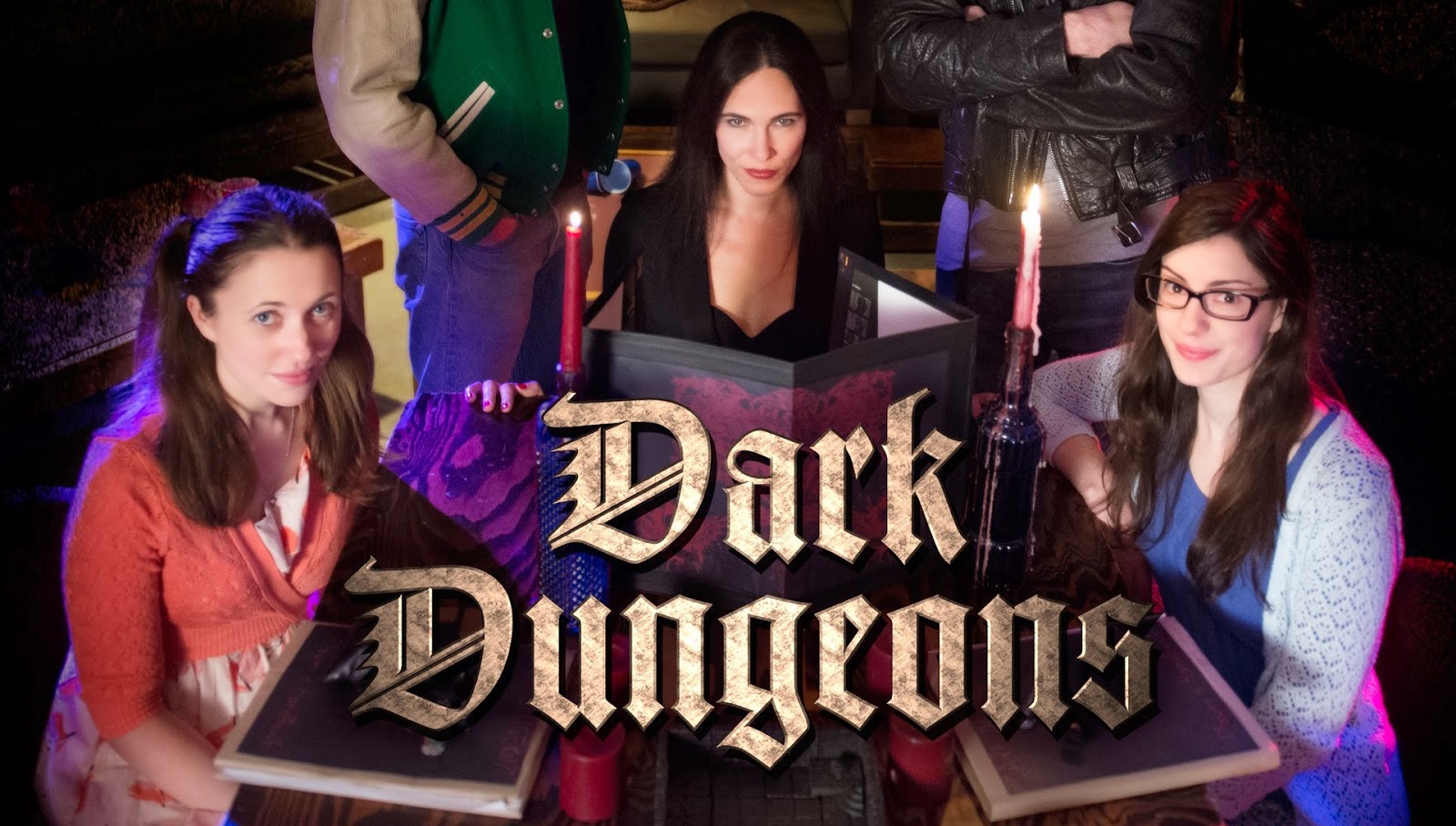 I'd totally forgotten about the Dark Dungeons movie that was funded via Kickstarter about a year ago. I posted about it last April.
Well, I was tooling around the web for the latest news and info on the RPG world today, and I happily came across something wonderful: there's a slick website for the Dark Dungeons movie! Go check it out right now!
I love how this is not billed as a satire, but rather a straight presentation of Jack Chick's infamous tract of the same name. I cannot wait to see this film!

An awesome tidbit from the website: "...despite the lasting popularity of Dark Dungeons the comic, RPGs have continued to grow and grow. RPGs spread like a cancer over the last 30 years and Dark Dungeons the movie shall be like something that cures cancer."
Posted at 10:45 AM 1 comments 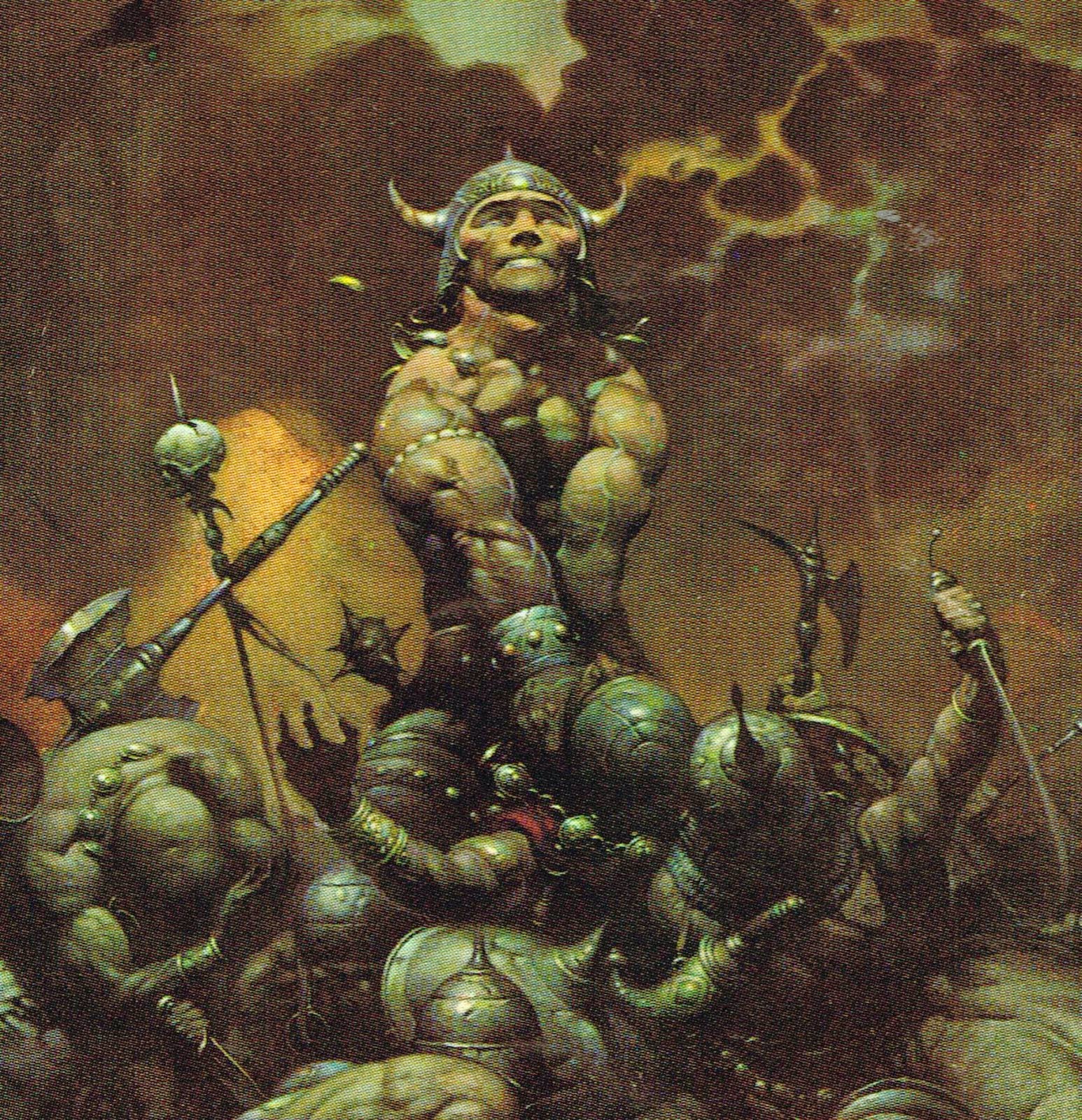 Yeah, so, last Friday I posted about my long-time dream of running a campaign in the world of Nehwon.
Well, there's another famous sword-and-sorcery world that has also cried out within me for a campaign: Hyboria. Yes, the world through which Conan strode in the tales of Robert E. Howard.
Both have their own appeal, and at the moment I've become torn between consideration of the two. Wow, that sort of indecision and ADD has NEVER happened to ME before, eh?
Anyway, I wish you all a good weekend. May you get some good gaming in! As for me, I'll be reading and dreaming...
Posted at 9:46 AM 1 comments 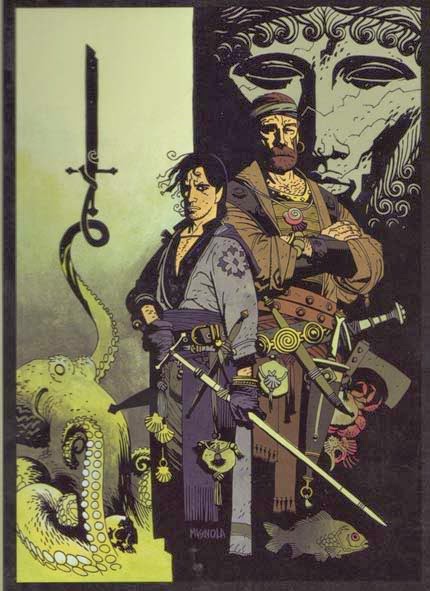 I don't think it's a secret that I miss roleplaying. I know I've whined about it on this blog before of late. As you probably (maybe) know, I've taken a sabbatical from roleplaying for the nonce, so as to dedicate my time to certain personal and professional endeavors that have been hounding me for some time.
Well, things are going slow and steady in the direction of my aspirations. Buuuut...the yen for roleplaying has not left me. Indeed, I think it's getting stronger.
Which brings me to why I'm posting an illo of Fafhrd and the Grey Mouser by Mike Mignola this week, in place of a selection from Elmore.
You see, I've long dreamt of running a campaign set in the world of Nehwon. However, I've talked in the past about using the Crypts & Things Swords & Wizardry variant as the rules for the campaign.
That will probably change. Indeed, I'm thinking of adapting my beloved Castles & Crusades to run a Nehwon campaign. The reasons? Well, most of the players I usually run with all have the C&C rules and are very familiar with them, as am I. C&C is a great system, and like all rules of the old-school mentality, it can be manipulated without too much fear of breaking.
Now, I haven't spoken to my long-standing Wednesday night group at my FLGS about a potential return to the table. I will have to run this by them, with the likely caveat that I'll only be running a session once a month for the foreseeable future.
Anyway, that's what's on my fevered brain on this particular Friday! I hope you all have a great weekend, and if you're gaming, roll some polys for me!
Posted at 11:36 AM 0 comments