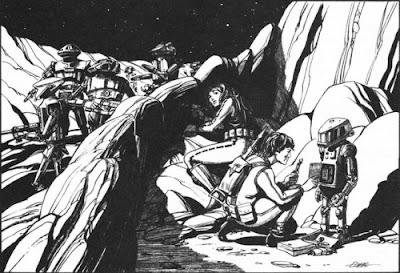 So, here's the scenario: we got the old gaming band back together. These guys are good friends I've known since my youth, and include gentlemen that were around in the early days of my gaming career.

We decided at last that it was a crime we haven't roleplayed together in ages. This had to be remedied ASAP. So, we set a date and got together. Me? Well, I got into my traditional role as DM.

Yeah, I said DM, not GM. Because we're playing D&D, baby! Moldvay/Marsh/Cook Basic/Expert D&D, to be precise! Yeah boy! It was beyond awesome to have the old crew around the table again! It's been far too long, criminally so!

But all regrets aside, here's what I'm doing with the old crew: I'm running an episodic campaign. Whoever can jump in during the sessions, that's who's there. Players/characters can pop in and out on the fly. If a guy can't make a session, his character gets "separated from the group," whatever. The excuse doesn't matter.

I printed out 70 pregenerated characters before the session (generated from this excellent site). Ten characters of each class. The guys decided to pick characters at random. Here's who they got:
The campaign is set on the world of Telluria, the setting for the Dwimmermount megadungeon. The campaign has started out in the town of Salton. A day's ride west is none other than Stonehell dungeon.

Oh yeah, I'm throwing it all into the pot, folks!

ANYway, three ladies and a halfling walk into a tavern after checking in at the adventurer's guild. The tavern is The Wanton Cockatrice, and the crew is there for a good time.

Cope the fighter puts her high Charisma to immediate work, looking to fleece some poor sucker out of some gold. She puts the moves on Finz the veteran fighter (an NPC), who she convinces to buy drinks for everyone in the place.

Eam the halfling earns some gold plucking on his mandolin, while Nufar and Devalla drink up (Devalla does so in a disgruntled manner, because she is generally disgruntled... by the way, she's a magic user with 18 Strength, 18 Intelligence, and 18 Dexterity... what can I say, that's how the character generator created her...)

Well, suffice to say the usual roleplaying tavern shenanigans ensued, interrupted by sudden iridescent flashes of light and rumblings from outside. The party scrambled outside to see flashes of rainbow-colored lighting emanating from the red crystal dome of a wizard's tower across the river to the north. The place has been the dwelling of a powerful magic user who has hermited himself there for years.

As the artificial lighting struck the surface of the river, a great bubbling arose from the depths. Then, pale, grotesque humanoid fish creatures pulled themselves from the water onto the docks.

The group sprang into action, entering into combat with the monstrous, disgusting things! Once the creatures were dispatched, the proprietor of the Wanton Cockatrice, a beefy fellow named Dirk, told the group that the wizard in the tower, the former adviser of Salton's Lord Brereton, had holed himself up in the tower years ago. During that time, events such as this would plague the town. The party resolved to get some sleep and investigate the tower in the morning.

Ah, but in the middle of the night, there were more screams of terror! The party awoke to see dark, hulking forms running through the streets outside the Wanton Cockatrice. Whatever the creatures were, they had broken into homes and murdered local citizens before disappearing.

The group suited up and headed out, and spoke with some members of the town guard, who led the party to a collapsed well in a nearby public square. The well had caved in not long after the shockwaves emanated out from the wizard's tower. The party, worth their adventuring salt, decided to head down to investigate. The town watch lowered them into the collapsed well.

The group found themselves in a winding passage, lined with burial niches. Perhaps they had stumbled upon an ancient Thulian Empire burial chamber? They lit up torches and lanterns and headed forward into the dark...

They eventually came to a larger chamber with several columns carved with bas-reliefs depicting scenes of conquest. None of them being Thulian scholars, they weren't sure if the carvings were from that empire, but the supposition was likely, given the fact that Salton is located at what would have been the eastern frontier of that old kingdom.

There were eight niches in the walls of this chamber, filled with bodies wrapped in ancient linens, and adorned with ceremonial costume jewelry. These were more elaborate burials than those found in the niches in the passageway they had just left, though the fake jewelry spoke of pretended nobility.

The group decided to cut open one of the "mummies" to see if there was greater wealth inside. The action of slicing open the wrappings exposed the group to a noxious, powdery substance. Saving throws were rolled, and a few of the group failed. Those who didn't make their saves began to cough up blood!

Then, the desiccated corpses in the wrappings began to stir, and ripped free! The cleric turned a few of the undead abominations, and the remaining things were defeated with a combination of weapons and magic!

We decided to stop there, after a long night of gaming and drinking! Overall, the group felt good to be back at the table! I, for one, felt great! After years of gaming with "strangers" who became friends, it was wonderful to be roleplaying with my original crew!

Session two of the campaign will happen next month! Can't wait!

P.P.S. One complaint I have is regarding the Labyrinth Lord screen I was using during the session. Now, I know there's some minor differences/modifications from B/X, but that's not my problem. Here's my gripe: I really wish DM screens had reminders of rolls for demihuman detection skills (hidden doors, etc.) and other abilities like what you have to roll to open doors, etc. But maybe that's just me. It makes me miss the unified SIEGE Engine mechanic of Castles & Crusades.
Posted at 10:32 AM 5 comments

Something Wonderful is Brewing... 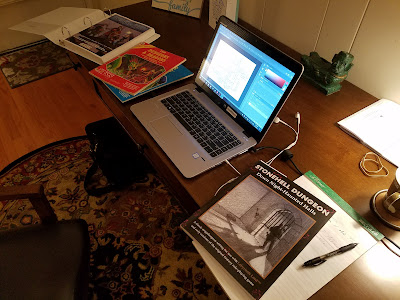 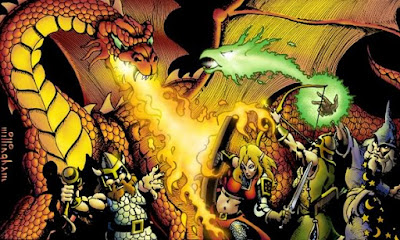 Love this Willingham illo! Of course, the one at the front of the Moldvay Basic book is black and white, but with some color added it becomes even more epic, no?

Incidentally, the image in my old, much-used copy of the Moldvay Basic book was colored in at some point by a prior owner. That is so cool, isn't it? I mean, someone else at some time in the past, perhaps back in the early 80's when the book was "hot off the presses," was so enamored of this image that they felt compelled to bring it to colorful life! Here's a shot of it: 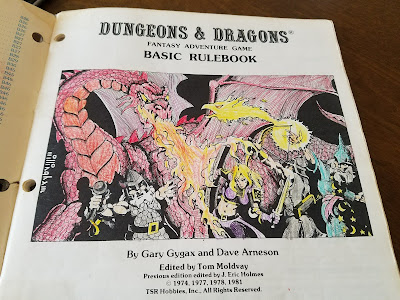