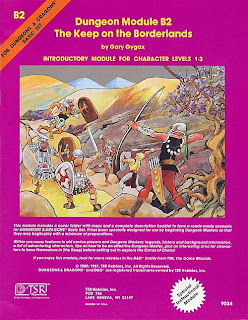 Just like miniatures, I never once used a module during any part of my gaming career. This was somewhat economic when I was younger, being a kid with not a lot of spare money.

But I was also dubious of the concept of modules because I never was a big believer in the concept of "RPG as commodity." I have always thought that you should only need a few core books in order to play a game, and that a company should never push you into buying more stuff (especially by withholding game mechanics and the like from core books in order to release them in subsequent books).

On top of that, since I've mostly been a GM and not a player, I always felt that the onus was on me to create worlds and adventures. I didn't want to leave that up to others. And I read a lot of fantasy and science fiction, so I could always pull from those sources for inspiration, rather than a published adventure.

But now I think I should have gotten into modules more, since it would have been another way for me to flex some of my creative writing skills. I've dabbled with the idea of publishing adventures and such over the years. Many are the times during my life that I wish I would have gotten into game design as a career. Ah, but enough of regrets...

These days, I am considering modules now as a busy adult/parent in his mid-30's. The more I make plans to start a campaign in the near future (cross fingers!), the more I realize that I will probably need to break my fast when it comes to modules. I simply don't have the time to build all of my worlds and adventures from scratch. I can't sit around for an entire weekend creating this stuff like when I was a kid. I am going to need all the help I can get! I will probably wind up doing some split (most likely not 50/50) between pregenerated stuff and my own creations.

So, the inevitable question: what do you think of modules? What place do they hold in your gaming circles? How important (or unimportant) are they for you?

P.S. I just bought my first module ever on the cheap from eBay: the old Keep on the Borderlands. I've heard of it and the other legendary early modules over the years (Tomb of Horrors, Queen of the Demonweb Pits, etc.), and I will finally actually get one of them in my hands and read the damned thing! This better be good, considering the years of hype!
Posted at 8:59 AM