An Early Christmas Gift from across the Multiverse


Christmas arrived a bit early this weekend, because I received my copy of Lords of Gossamer & Shadow! This is a diceless game that was built on the foundation of the Amber Diceless Roleplaying game, which was created by Erick Wujcik in the early 1990's.
I was a supporter of the Kickstarter, and it's great to finally have the gorgeous hardcover in my grasp!
As I've said before on this blog, I was a huge fan of Amber Diceless RPG back in the 90's. A few friends and I had "graduated" from Dungeons & Dragons and were looking for a more "adult" RPG. Ironically, it was those mysterious and cryptic ads for Amber Diceless RPG in Dragon magazine that alerted us to its existence.
My friends and I got some copies of Amber DRPG, as well as the Roger Zelazny novels on which the game was based. If you haven't read the Amber novels, you really should check them out when you get a chance. I don't think you'll be disappointed.
Anyway, we immersed ourselves in Zelazny's mythology and the larger-than-life godlike characters that inhabit it. And from there, we created characters that were the children of those beings, and made the universe our playground. It was a glorious time in my roleplaying career, matched only by the early years that were consumed entirely by D&D.
I, of course, still have my Amber rulebook from back in the day. Here's a shot of that old tome with its "spiritual successor" next to it: 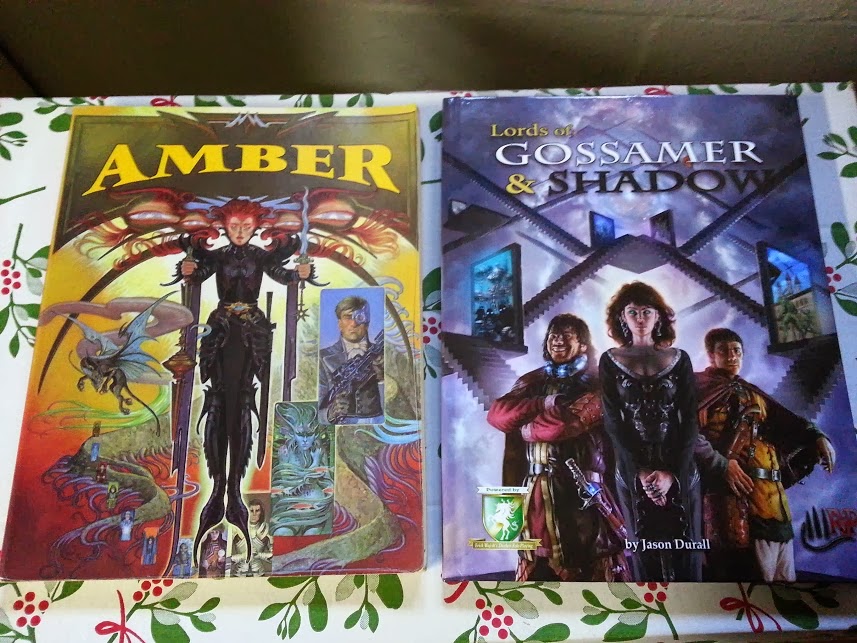 Steven Russell and the folks at Rite Publishing have, in my humble opinion, crafted not only a gorgeous book, but also a thoughtful and deep book that pays homage to its "source code." Sure, the game has "stripped away" the Amber mythology, but I think it's very cool what Rite has constructed in its place. They've made the system "setting neutral" in a way, even though there is technically a setting of sorts. Ultimately, you don't have to be steeped in Amber lore to get into this new version.
ANYway, I can't wait to get some time to read through LoG&S. If you're interested, check it out through DriveThru RPG.
Mr. Russell, during the final stages of the creation of LoG&S, asked backers if they'd like to volunteer to proofread the book. I leapt at the chance, and sure enough he sent me some pages. I'm proud and honored to be listed as one of the proofreaders in the credits of the book, as well as a backer. Thanks again, Steven!
It's really cool to have been a part of this "resurrection" of the late Erick Wujcik's game, bringing it back into print via this new form. It's the least I could do for a game that brought me so much happiness and roleplaying goodness.
Posted at 10:07 AM