Can a fella get a barbarian horde over here? 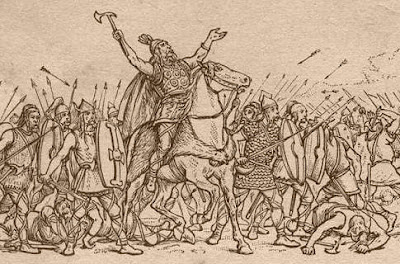 It's Friday after a busy week in the life of yours truly. And I'm feeling disgusted by our little "civilization" here in the United States. I am tired of the mewling and whining and excuses from mollycoddled weaklings. These weaklings are weak mostly in spirit. Why? Because the culture promotes backstabbing, finger pointing, brown nosing, and the like...all of which are the last resort of those unwilling to do right by their fellow citizen. Because doing right is hard work, and the corpulent and lazy in power can't be bothered with hard work. The lickspittles are in charge. The land is rife with fearmongering.
Conan was right to mock civilization. It allows criminals and cowards to take advantage of things by manipulating and corrupting the systems of government, finance, etc. The actions of the snivellers and villains may not often be illegal in the eyes of the law, but they are not moral. Those with a moral compass suffer because they do not seek to gain advantage over others through deception.
I so want a horde at my disposal today. I want a tide of furious folk who are untainted by my civilization's corruption to sweep away the old and broken order. And if I can't get that in reality, I sure wish I could get it at a table-top somewhere right now. Either way, I need me some so-called "barbarians."
As Walt Whitman might say, "Yawp!"
Posted at 12:09 PM