Salton Seekers - Session 1: Into the Barrowlands (and 1st Annual D&DBQ) 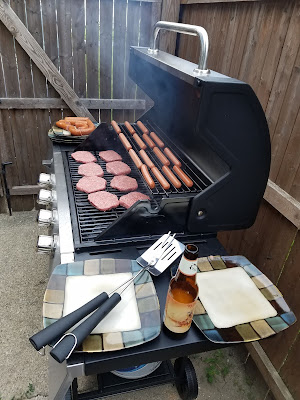 We kicked off our reinvigorated Salton Seekers campaign in grand Summer style last Friday! We decided we would hold our inaugural D&DBQ! Props to my boy Jim for granting the event its name!

So, before the gaming started, we gathered up some barbecue staples, everything from burgers and dogs to kielbasa and chicken. We also had a bevy of sides, and even a cheese and cracker plate! We're not barbarians, folks (especially because we're playing Labyrinth Lord)! No, we have class (or rather, classes...seven of them, to be exact)! And of course, the beer flowed freely!

After fueling up, we headed to the gaming table! Here's the characters and the players:
Just a note: I love the names of these characters! And a well-balanced party. All the characters except for Nikolaus were pregenerated at Wizardawn.

To set the scene: On the planet Æarth, at the northern tip of a continent ruled by the New Thulian Empire (which arose from the ashes of the Old Thulian Empire), lies the frontier city of Salton (known as Salt Town when it was founded as a humble fishing village hundreds of years before).

So, the session started with the gang (minus Pat's elf because he was running late for the game) gathered at the adventurer's guild. One of the guildmasters made some announcements of adventuring opportunities in the area. The party decided to head to the barrowlands, to investigate the rising of the dead (for the promise of a reward of 50 gold apiece if they could bring back some good evidence of what is causing the dead to rise).

The rumor is that something is amiss with the neutral god of death, Nergal, who hates undeath for obvious reasons (he wants the dead to stay dead). There are two gods who are in constant conflict over the domain of undeath: Set and Orcus. The Church of the One True God doesn't like any of these opposing deities!

A half-day's ride on rented horses brought the party to the eerie expanse of burial mounds south of Salton, a place eternally drifting with mist and strangely quiet. As the group began to explore and investigate, they found a trail of somewhat fresh blood, as if someone had been dragged through the calf-high grass after being killed.

The gory trail led to the entrance of a smaller barrow, which had been opened some time in the past. They were met with a grizzly sight: the half eaten remains of some human limbs. There was a strange darkness within the barrow entrance that neither daylight or lantern light could illuminate. Xander the thief detected wet sounds emanating from the barrow...

After a lot of cautious planning, the group moved into the darkness of the barrow. Within, they found a sarcophagus, behind which hid several ghouls finishing a gory feast of human flesh. The cleric cast Light, bringing the illumination of the One True God to the chamber, which finally banished the unnatural darkness that their torches and lamp could not.

The party made short work of the ghouls, then studied the sarcophagus. The lid sported a carving of a strange-looking beetle. Actually, evidence pointed to the fact that the lid once featured a different carving, one that was reworked into the shape of the beetle for some reason. They decided to open the sarcophagus. Pushing open the lid, they saw a body wrapped in bandages, adorned with magnificent jewelry and with an ornate silver dagger on its chest. There was also a scroll resting above the head of the wrapped body, with a wax seal bearing the eye symbol of Nergal, god of death.

Nikolaus the cleric decided to break the seal. The scroll was written in ancient Thulian, which the magic user Devalla can read. The scroll was a blessing for one called Sheeara, a priestess of a god called Khepri. Nikolaus knew that Khepri is worshiped in the deserts far to the south. The scroll praised her for her sacrifice in the struggle against the vile servants of Set and Orcus. The group cut open the corpse's bandages to reveal the recently deceased Sheeara herself. Out of respect, they resealed her sarcophagus.

Though the party had enough evidence to obtain their rewards, they decided to check out the central barrow in the vicinity, surrounded by a ring of standing stones and rumored to be the entrance to a maze of tunnels below. They noted much evidence of other adventurers having come and gone from the area: broken arms and armor, signs of old blood, cast-off equipment.

Entering the central barrow, they saw a old, much used tripod with a pulley system and rope hanging down into a pit at the center of the chamber. The group used one of their own grapples and rope to lower themselves down. They saw more evidence of many past adventurers in the form of graffiti, some crude and some ominous, mentioning the deaths of comrades.

The party found passageways that seemed well-constructed, not the rough tunnels they were expecting. They turned down a short passage and inspected a door. Moving through it, a trap was triggered that brought down a heavy stone slab in the doorway. They group had no choice but to throw themselves into the room beyond the door. Another door, on the opposite side of the small 20' x 20' room, burst open, and five grotesque humanoids ran in, armed with crude but wicked-looking weapons. The beings themselves were strange hybrids of man and animal, and some looked like mutated humans.

The party slew two of the creatures, causing the rest of the hideous humanoids to retreat back through the door from which they entered. Then, the stone slab that had trapped the adventurers raised back up, allowing the group to escape. It was then they encountered Gideon the elf (Pat arrived after work), who had just come down from above, on a mission from the elf king of Dolmenwood, Atanuwe.

The group, with Gideon now joining them, decided to head back to Salton before night fell. They were able to return to the city before too late in the night. They promptly returned to the adventurer's guild, and showed their evidence to one of the guildmasters, who suggested that the scroll be taken to the temple of the One True God for study. The party decided to rest for the night at the most notorious inn in Salton: the Wanton Cockatrice. That's where the session ended, well after midnight in the real world!

Thanks for reading this recap! I hope I wasn't too cheesy... 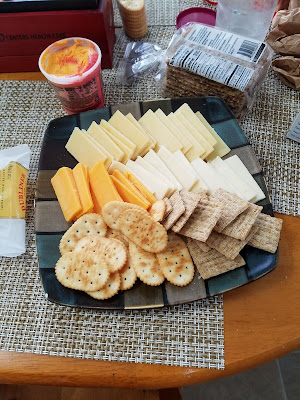