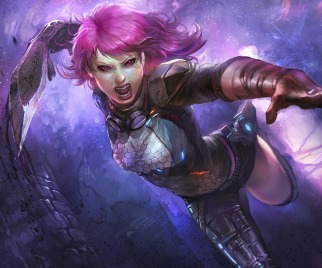 I guess I'm sorta late to the game when it comes to Titansgrave, the first setting for use with Green Ronin's Fantasy AGE RPG (which was originally introduced as the system behind the company's Dragon Age RPG). Wil Wheaton (yes, Wesley Crusher of Star Trek: TNG fame) helped create Titansgrave, and ran a bunch of sessions that aired online a few years ago. You can go here to watch Wheaton run the seminal Titansgrave sessions.

The Titansgrave setting combines magic and technology. Yes, think Shadowrun. But on another planet. And with more of a medieval flavor in some ways. But also blasters, flying vehicles, cyborgs, and neon. Lots of neon.

The illo above is by Rayden Chen, and depicts one of the characters from Wheaton's Titansgrave sessions: Lemley, who wields a blade named "Dr. Lobotomy" from her cybernetic arm!

In general, I kinda dig the setting and the vibe! Plus, having run a few sessions of Dragon Age a little while ago, I've learned to like the AGE system. Once my current Labyrinth Lord campaign is over, I'd consider running some Fantasy AGE, perhaps on Valkana (the planet featured in Titansgrave).
Posted at 12:00 PM