Who will weep for lost Grognardia? 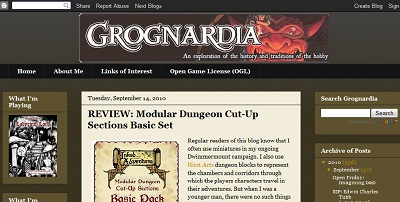 Okay, perhaps the title of this post strays into the territory of histrionics, but bear with me. It's been about eight months since James Maliszewski made his last post on his blog, Grognardia. And I'm feeling nostalgic for the days when James' posts were a regular part of my RPG blog-reading experience.

Perhaps the very damp summer we've experienced here on the East Coast of the US has me in more of a maudlin mood than usual. For whatever reason, I find myself once again missing the "old days" of Grognardia. By old days, I personally mean the two years between mid-2010 and mid-2012 (i.e. when I was reading it). As it was for many folks, Grognardia was one of the first OSR blogs that I came across, when I decided to search the web for the current state of roleplaying affairs in the world.

Look, I wouldn't describe myself as being someone who worshipped the man. It was more his content that kept me reading, rather than any deep interest in James as an "OSR superstar." I didn't return to the hobby in order to join a cult of personality. I was looking for kindred spirits. I was looking for those who, like me, were either coming back to gaming as adults, or those who had never left the hobby (the latter being sources of extreme inspiration for me, and perhaps some jealousy!).

Above all, I miss the enthusiasm and flow of interesting ideas that used to emanate from Grognardia. When James used to put out tidbits about his home campaign, before Dwimmermount became a commodity, I used to eat up the details eagerly. I really liked the creativity that James was showing, and it was an inspiration for me, as someone who was coming back to the hobby. There was a genuine feeling of dynamism to what James was doing back in the day.

But I think that some bloggers don't survive these attempts to become game designers/publishers. Some are cut out for it, some aren't. There's ample evidence of the "failing or failed amateur game designer," as outlined in regularly-scheduled detail at Tenkar's Tavern and other blogs. I blame those failures mostly on the dreaded stretch goals, but that's another blog post...

I'm thinking that James might have been able to handle the game designer burden, but it seems his life circumstances got in the way. Or perhaps, even if he didn't have issues with his father's health or whatever, he might not have been able to deliver on his projects. Who knows? I don't fault him for being emotional over his life issues, but in this digital age there are plenty of ways to reach out to the world at large, especially when it comes to business associates, even from the depths of grief. But, who am I to judge?

At any rate, I suppose my feelings are part of a normal "grieving" process, right? I mean, I don't claim to know the future, and it's very possible that James will return someday to the blog. However, that doesn't alleviate the memories of the Grognardia-that-was.

Anyone out there want to share their own memories of Grognardia?
Posted at 10:39 AM