Fantasy from Across the Pond

I'm something of an Anglophile. I pretty much love all things British. Lately, this love affair has (once again) come to include British RPGs, specifically those that would be considered old school.

Perhaps the most famous British RPG, Warhammer FRPG, has been on my shelf for ages. I have a copy of the 1st editon with the awesome cover below (I've always thought that the wizard guy to the right looks like Jack Palance): 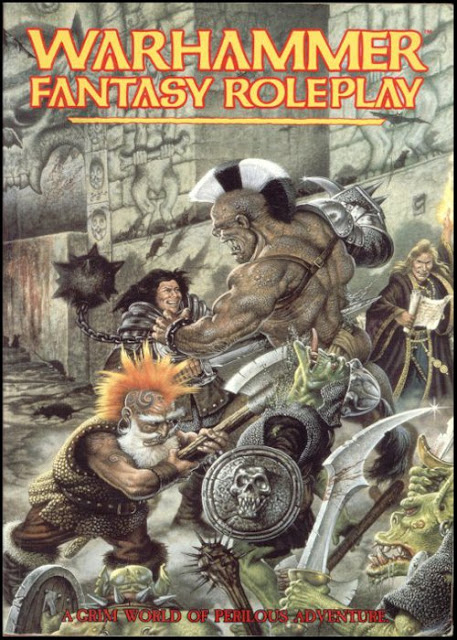 I picked it up years ago, but I've never played it. Everyone around me was so into D&D, Palladium games, or Amber Diceless RPG that there was never any interest to do anything else.

At Free RPG Day a couple years ago I grabbed the Dragon Warriors introductory booklet put out by Mongoose Publishing. This was my first exposure to that game, and I acquired the Mongoose editon of the rule shortly thereafter. Again, I haven't played it, but it looks really cool.

Something about having a British RPG has always seemed so exotic to me. Perhaps this feeling started when, as a teen (who had already been playing D&D), I found a copy of The Forest of Doom in a used book store, one of the Fighting Fantasy game books. I still have my copy, and it's still in great condition (cover image below): 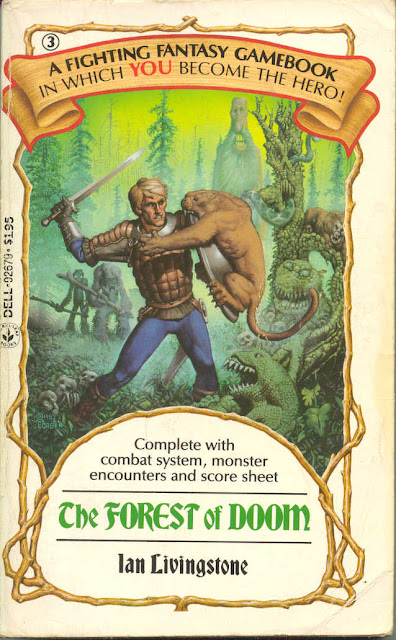 Here was a game (albeit with a rather simple game book system) that WASN'T D&D, with mechanics not at all based on the D&D engine. What a concept! And the fact that it was British?! Even better! The simplistic nature of the mechanics wasn't lost on me, but I was enchanted nonetheless (Note: I encounted Fighting Fantasy before Warhammer).

I enjoyed playing The Forest of Doom, but I never tried to find any other Fighting Fantasy books. D&D and, later, other games were so prevalent in my life that they overwhelmed all other concerns.

These days, I'm once again curious about British RPGs. Newt Newport over at Sorcerer Under Mountain (the mind behind Crypts & Things) has been posting about old school British RPGs, and this post alerted me to the existence of Advanced Fighting Fantasy.

I'm really intrigued by Advanced Fighting Fantasy, and I'm working on getting myself a copy of the second edition of the rules. And this time, I'm determined to not let a British RPG just sit on my shelf. I'll let you know what I discover, once I get my hands on that book!

In the meantime, everyone feel free to share their own experiences with British RPGs, please!

Edit: It wasn't until recently that I acquired my second Fighting Fantasy game ever: Wizard of Firetop Mountain for my iPhone. I'm trying to picture what would happen if my current self was able to time travel, and tell my teen self that one day I'd be playing a gamebook on something the size of a calculator. Sorry, the passage of time wigs me out most of the time.
Posted at 10:10 PM