A Tale of Two Catalogs

So, as I was digging through my old RPG stuff at home recently, I came across some interesting items from the early 90's. That era was the peak of my Dragon Magazine collecting, and I went through a spate of ordering the free stuff (mostly catalogs) advertised in the magazine.

In my recent delvings I found the following "catalog" (I use the term catalog loosely, because it's really just several sheets of 8.5x 11 paper stapled together) from Wizards of the Coast, circa 1992: 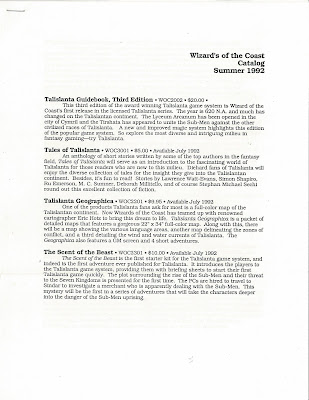 WotC was clearly a small outfit at the time. All they were really marketing in 1992 is material for the Talislanta game!

Now, I also recently found in my stuff one of the TSR catalogs from 1992. Here are some scans of that: 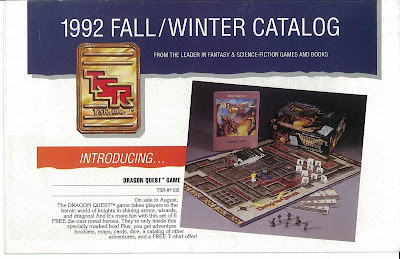 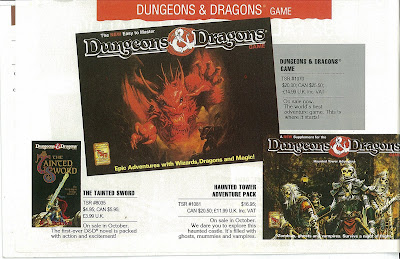 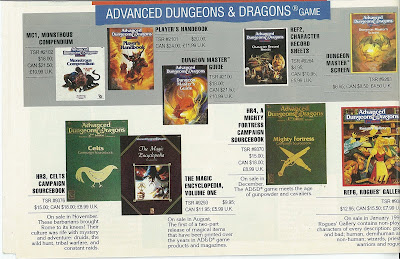 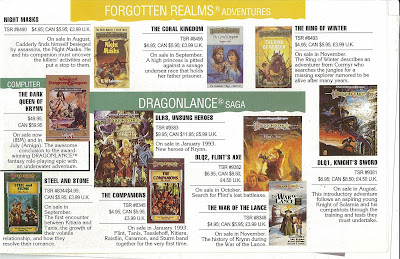 My, how things have changed over the years, eh? Very indicative of the sheer glut of stuff TSR was putting out. I find it so strangely time/mind warping to look at this old stuff. The sense of time displacement is so weird! Meanwhile, has anyone else seen the cover of the WotC 2011 catalogue (2011?! My teenaged self in 1992 could not even conceive of such a year! I was too busy pondering what the undoubted wonders of 2000 would be)? It shows the Larry Elmore artwork with the fighter going up against the red dragon from the cover of the D&D Basic "red box" set. And I think they're using that same image and design from the old Basic box for Essentials. Does anyone else find this apocryphal?! They're trying to associate their D&D Essentials line with OD&D? It's all very strange indeed...
Posted at 10:50 AM