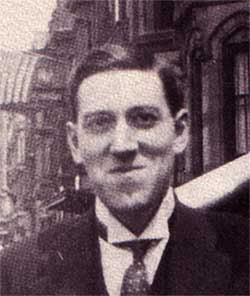 Howard Philips Lovecraft was born on August 20th, 1890. I discovered his weird writings as a teenager and have been hooked ever since. I have a few of the Del Rey reprints of his stories in my personal library. Every year around Halloween it's a ritual for me, taking those books off the shelf and delving into them. I read them on the train to work or in a park, and as the words shift my reality into the strange, I look about at those around me and wonder if we're all just scurrying insects under the poised crushing thumb of some unknowable terror...

I think I might have to check out The Strange Adventures of H.P. Lovecraft sometime soon! Ron Howard was heard sometime last year, I think, talking about adapting this comic series into a movie.

And then there's word that Guillermo del Toro is doing a big screen treatment of "At the Mountains of Madness." However it happens, I hope Lovecraft does finally get a good film that introduces him to a wider audience. Cthulhu knows there's been a plethora of terrible B movies created from his work.

So take a moment today and check out the H.P. Lovecraft Archive, which is probaby the best website about Lovecraft that I've come across. Let's celebrate the man who is one of the inspirations for James Raggi's Lamentations of the Flame Princess RPG, which I'll be running soon!