The Campaign is your backstory, and your future... 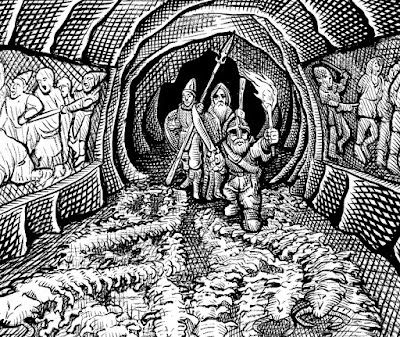 While perusing my old unpublished posts, I came across some musings that arose from reading a post over at the venerable Beyond the Black Gate. This particular post was entitled "What is a Character?"

I think this is part of what old OSR grognards are getting at when they rail against the "storyteller" type of RPGs. Yes, we don't like being railroaded in slavery to a GMs story for their campaign. And yes, we as players don't want to play the part of "frustrated novelist" by writing up a huge backstory for our characters.

There was a time back in my youth that my friends and I did slave away on deep, complicated backstories before/while rolling up characters. But after a time, this became onerous indeed. And restrictive. In RPGs, characters really don't become three-dimensional beings until they're LIVED, so to speak. Or should I say, PLAYED? Really, it's both. For a character to come to life, it MUST be played.

A cursory character background outline can, and often will, inform what a GM throws at a character, and a good GM will weave some of that cursory player-created background into a campaign. But also, as one play's a character, ideas will occur to the player that can be incorporated into the background, i.e. the character's past.

Simultaneously, as suggested in the Beyond the Black Gate post, the player is creating the story, the LEGEND as it were, of their character as they progress through levels.

Backstory doesn't have to be dreamed up whole-cloth before playing a character. Yes, you can come up with an outline for what your character was up to before a campaign starts. But the real meat of a character comes from the exploits that evolve through play. Those experiences are always going to be more tangible, more meaningful, than the story you make up for a character's background. Because you LIVED it!

What do you think? Agree, disagree? How do you use background/backstory in your roleplaying?
Posted at 11:58 AM