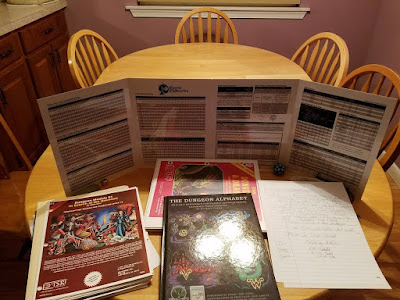 I know, I know...I said in my first post of 2017 that I didn't want to finish blogging about my two sessions of RPG action with the neighborhood newbs...but I started a post and dammit, I want to publish it!

Specifically, I want to post it because of my inane...observations. And because I have no time to blog here usually, so wasting my precious words is a crime to my sensibilities.

See below for the fragment I wrote up before despair overtook me and my will to write on...

Let's return to the recap of my newbie players and their first RPG session, shall we?

So, a gang of goblins (probably the same that attacked the priests of Libra) came running out of the excavated barrow and attacked the party. The group made decently short work of the creatures, but player Laura (aka Noo the cleric of Leo) had the presence of mind to consider capturing one of the goblins in order to interrogate it.

Now, this brings me to an interesting observation: these folks, being newbs, have actually displayed a lot of aspects of more experienced players. Specifically, from the very first battle, they decided it would be a good idea to have a captive to interrogate.

And, if it came down to it, they wouldn't balk at a bit of torture to get information.

Now, does this say something about human nature? Granted, we're talking about an imaginary torture situation of a non-human creature, so there's really no need to be disturbed by the players decision. But I find it really interesting that no matter who I've gamed with, no matter the experience level of the players, they usually see the need to get captives and glean information, and consider torture a necessary evil.

Again, human nature? Or is there too much torture on the TV and Internet to learn from? Too much waterboarding and Gitmo Bay news footage to teach them what to do?

Anyway, they did indeed capture a goblin and started to interrogate, and of course threatened it with torture. The goblin told them it was a part of a tribe that moved into tunnels below the barrowlands. When the archaeology team ventured into their tunnels, the goblins reacted, attacking the humans and capturing them.

The goblin offered to take them to the captives in exchange for its freedom. They decided to take a chance and believe that the goblin was sufficiently cowed to guide them truthfully and accurately.

That's all folks! Little did I know at the time of the writings above that the newbs would also resort to the good old lamp oil Molotov cocktail tactic in the dungeons they entered! It was instinctual, I tell you! They just came up with it out of nowhere! No prompting from me at all!

Am I way too excited about this? Let me know, please!
Posted at 9:27 AM