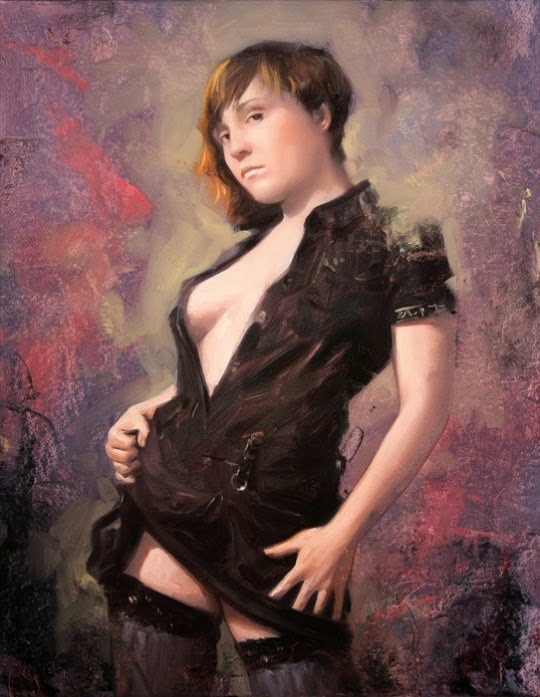 I don't want to be another fool (see what I did there?) to screech in awestruck wonder that it's "already April 2015"! But come on, where is the time going this year, eh?!
Ah, spring! What red-blooded male doesn't start having images of fair maidens dancing in his head at this time, I ask you? Thus, the illo above, by a fine artist named David Palumbo that I just personally discovered. I find the image to be a mash-up of classical portraiture and modern art. What do you think? What pops into my mind is...this looks like something Rembrandt might have painted if he knew about cyberpunk.
I usually try to avoid serving too much "cheesecake" on this here blog, but then again, could the illo above actually be considered cheesecake? I find it tasteful, with a bit of eroticism thrown in. How about you? I guess it might be a bit NSFW.
Anyway, give Mr. Palumbo's site a peruse when you get a moment. Be warned, there are nekkid ladies in some spots, so his site I suppose should DEFINITELY be considered NSFW.
Well, my prudish musings are at an end! Enjoy!
Posted at 11:45 AM