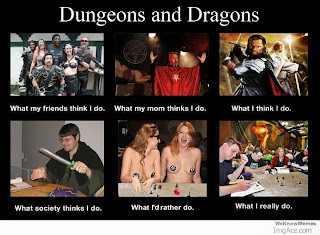 To start the new year off, I've decided to *GASP* jump late onto a certain bandwagon started by (I think) Tim Brannan over at The Other Side blog. Or maybe it started on Monsters & Manuals. Oh well. Without any ado, here's my personal RPG profile:
I'm currently running: Nothing. As anyone who's read this blog of late should know, I'm taking a bit of a break from actual play in order to work on some big old dreams, pertaining to a new career. A different sort of adventure, as it were. But the blog is going to be an outlet for my gaming fantasies. That sounded weird, now that I re-read that. ;-)
Anyway, over the past few years I've run campaigns of varying lengths in the Forgotten Realms, Greyhawk, and even a bit in Rob Conley's Points of Light setting. The rules I've primarily used were Castles & Crusades and Labyrinth Lord.

I would especially like to play or run: I would like to run some steampunk or cyberpunk action someday, probably using Savage Worlds. Then there's the possibility of using my shiny new Lords of Gossamer & Shadow book to run a diceless RPG game in the grand tradition of Amber Diceless!


...but I would also try: WotC's "next" version of D&D! It's a big event this coming year, no one should be able to deny that. Whether or not you see this 40th anniversary D&D event as a big blessing or a big apocalypse is another matter...I for one am remaining optimistic, though my readings of the playtest packet find me uninterested in using the new rules to run games.
I live in: In South Jersey, in the shadow of Philadelphia!
Two or three well-known RPG products other people made that I like: The Five Ancient Kingdoms RPG created by Jonathan Becker of B/X Blackrazor fame (have to do a proper review of that someday), as well as his B/X Companion. Close to my heart is the Castles & Crusades Player's Handbook, with really brought me back to the table-top armed with an awesome set of rules.
Two or three novels I like: Neuromancer by William Gibson, Dune by Frank Herbert, The Gunslinger by Stephen King.
Two or three movies I like: Big Trouble in Little China, Mississippi Burning, Dead Poet's Society.
Best place to find me online: Right here on the old blog!
I will read almost anything on tabletop RPGs if it's: open-minded. If someone is being a grumbler about the hobby just because they don't want change, then I'm not interested.
I really do not want to hear about: How the "damned kids these days" don't play the game "right."
I think dead orc babies are: really a silly argument. BUT, this sorta ties into something I want to discuss coming up shortly. It's going to be related to an older version of D&D, a re-read of those older rules, and the question of heroism in connection with said older rules. Stay tuned.
Games I'm in are like (link to something): Pretty much this. Because my regular group gets up to some pretty inane antics. We aren't afraid of retreating expeditiously, and in general like to be very pragmatic...perhaps to a fault.
Free content I made for D&D is available: on this blog, though there's not too much of it I'm afraid. Probably the most significant would be my house rules.
There were a couple other items that I thought didn't apply to me, so they've been deleted. Anyway, enough with this silly, self-indulgent exercise that I've used to get my first post of 2014 out the door. Hope you all had a happy new year celebration, and we'll meet again soon!
Posted at 9:28 AM