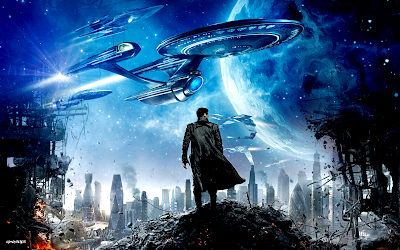 I always liked the version of Star Trek that was in my head more than what they have shown on the big and small screens. My preferred Trek is more like The Original Series or the current J.J. Abrams films, as well as the Enterprise series with Scott Bakula and friends (if I had to put them in order of preference, I would go with Enterprise, J.J. Abrams' version, then TOS).

Yeah, those versions are most similar to what I personally want to see when it comes to Star Trek: a more wild and woolly crew and a universe to match. The other versions of the series could be a bit too...sanitary?

Anyway, I'm going with some friends to see Star Trek Into Darkness on Sunday, and I'm looking forward to it. I enjoyed the first film, but didn't think it was spectacular. But again, I liked it because it fits my personal preference for Trek flavor: grittier and a bit less cerebral. I'm hoping that, since the first movie is under our belts and the "get to meet the crew" phase is over, we can move on to more interesting and solid storytelling.
And of course, in true Anthony fashion, my returned interest in Star Trek has come with a renewed urge to ROLEPLAY Star Trek! What else is new for Gamer ADD Boy?! I fear that the talented Mr. Dan Proctor has something to do with this current desire on my part, thanks to Goblinoid Games' Starships & Spacemen RPG. But I'm trying to fight this distraction like Kirk fighting the gorn, "judo" chopping and all.

P.S. Sorry for lack of posting of late. The switch to a new job has been sucking up my time.
Posted at 9:56 AM