Why do we bother with all this blogging?

Over the past year, I've encountered two different kinds of bloggers that confuse me to no end. Let's call these two types the "elitist" and the "nihilist." 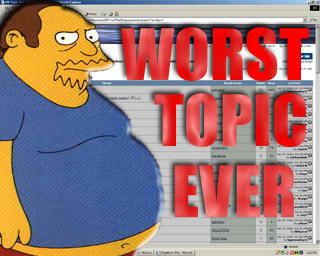 The elitist in the RPG blogoshere is the person who does not just give their opinion. If these types of bloggers just gave their opinions on things, they would be like the rest of us in the majority (or what I would like to consider to be the majority): gamers having civil discourse and tolerating the opinions of others, and ultimately engaging in lively conversation and calm debate.

The elitist expresses their opinion AND attacks the opinions of others, and/or attacks other people personally. I'm continually dumbfounded that some people have the gall to think that they are the ultimate arbiters of some sort of universal truth when it comes to gaming. They seem to think they know what the best game system is, or what the best way to game is, and declare those who don't think otherwise as being idiots. 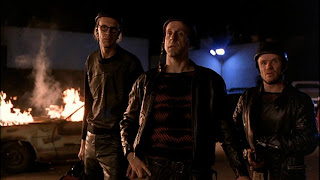 The nihilist is a blogger who expresses confusion at why other people have opinions. These types will go out of their way to declare whole topics of conversation as being pointless. They usually tend to chime in on any of the topic trends that periodically sweep the blogosphere (such as the recent arrival of Dungeon Crawl Classics RPG on the scene, or the controversial Lamentations of the Flame Princess Grindhouse Edition). But when they chime in, it's to state that the whole discussion is totally without merit and they can't understand why people are talking about the subject at hand. And that's it.

Again, the elitist seems to be much more understandable. They're here to attempt to lord over a scrap of the Internet, they hold forth and make declarations from their ivory towers, and demand to be acknowledged as masters  of the subject matter.

But I guess the nihilist is so confusing to me because I wonder why they even bother to be a part of the blogosphere. Are they just trying to be sticks in the mud? This last thought is not satisfying to me, because there are at least bloggers like the minds behind Your Dungeon is Suck and Joeskythedungeonbrawler who are clearly putting on a persona and actually can be entertaining to read. They can actually be creative in their bashing and obviously put effort into their blogs. And their level of dedication to gaming is obvious (to me at least), so their apparent loathing for other gamers or certain game systems is really (to my understanding) rooted in a deep-seated love for the hobby.

The nihilist is really not that entertaining when they are poo-pooing topics, and they put no effort into their posts. And more often than not, they don't seem to really enjoy gaming.

Why do the nihilists stick around? If they are that confounded and are so unwilling to converse other than to say "this is stupid," they why don't they just stop reading/writing and do something else with their time? I guess I'm just so mindful of how I spend my limited free time that I guess I just couldn't fathom spending that time on something from which I derive no pleasure.

So why ARE we all doing this blogging thing? I believe it's because gamers are often people for whom gaming was/is a bit of solace. A safe harbor where imagination can soar and remove us temporarily from the pressures of life. They are those who appreciate the ancient tradition of storytelling. Or they just get a kick out of slaying and reaping kingly reward. Whatever the case may be, blogging allows our eclectic group of hobbyists to share thoughts, read other people's perspectives, seek advice, commiserate, celebrate, find kindred spirits, etcetera.

Anyone want to put forth any thoughts on these types, especially the nihilist? Am I just being naive? Are these types more often than not putting on facades and just playing roles? I guess that last possibility is somewhat ironic, eh?
Posted at 3:08 PM