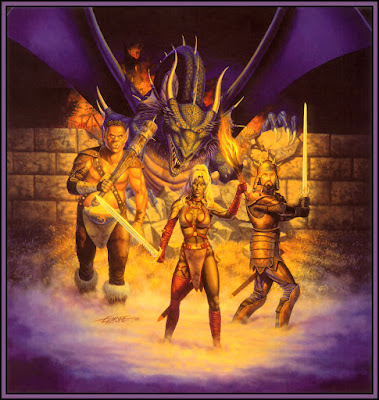 The second session of my Basic D&D game with the "neighborhood newbs" is tomorrow night.

I'm going to publish part two of our first game session report sometime between tonight and tomorrow. Then, I throw them back into the depths of Stonehell Dungeon! Muhahahaha!

Wish them luck, they're going to need it!
Posted at 1:58 PM 0 comments

Yes, On Friday night (October 21st) we had "roleplaying with the newbs" night! Over the last few weeks my wife and I had heard through the grapevine that some folks in town were curious about D&D. My wife leaked the word that I am a veteran roleplayer, and...Boom! A game night was scheduled!

I expected people to be a bit shy and tentative about the experience. I expected some of them to be nervous about word getting out that they were playing D&D. All very normal and valid concerns for the casual gamer, given the stereotyping and ridicule of gamers that still exists in the world.

I assured them I'm a discreet game master! No need to fret, folks, your secret is safe with me!

Everyone arrived at our place, and introductions were made as needed. We had a good supply of food and drink to share. I called everyone to the kitchen table, where I had my DMing gear already set up.

There was much joking and rib-poking as the players went through the pile of pregens I provided. I made a short speech about the rules and gave them a tour of their character sheets, but I could tell they just wanted to play.

"We'll get the hang of it as we go along," they insisted. "Let's get started!" Eager, they were, indeed!

So, I set the mood and the stage: Castle Westguard, a wilderness outpost of the Great Kingdom in Southland (thanks Rob Conley, for the setting). The lord of the walled settlement, Lord Griff, needs hearty adventurers to explore the barrowlands to the northeast. Why? Because an archaeological dig seeking artifacts from ancient kingdoms has gone missing, of course!

Lord Griff needs those willing to sacrifice life and limb for the promise of treasure. "Go, find the lost archaeologists," he decreed, "and you'll be rewarded 10 gold pieces each!" The party was ready for adventure, indeed, and they set out without hesitation!

Our party of first and second level pregens (created via Wizardawn) consists of:
(note, I made the on-the-fly decision that the gods of this world are the twelve gods of the zodiac, based on the suggestion of one of the players...)
As they marched through the barrowlands, they came upon a grizzly scene: three dead bodies of priests (of the god Libra) laying outside the excavated entrance to one of the barrows.

The party decided to investigate, and discovered one of the priests was still alive. He was badly wounded, so Noo the cleric decided to heal him. Once he recovered enough to speak, the priest introduced himself as Brother Thomas, and he thanked the party profusely before telling them that he had been part of a group of ten people sent by Lord Griff to excavate barrows. The ten were a mix of scholars, priests, and guards.

The scholars had been following an ancient text that pointed to this particular barrow as having deep significance to a long-dead civilization. They had broken open the entrance and entered the circular chamber within, the walls of which were lined with niches that contained mummified bodies wrapped in linens.

One of the scholars had walked onto an elaborate mosaic of colored stones in the center of the chamber. The floor had given way underneath the man, who had plunged a hundred feet or so to his death. The majority of the group decided to descend the shaft to recover the body and explore what was below.

Thomas and the other two Libran priests had remained on the surface. They waited for hours for the return of their fellows, and even engaged in some prayer to pass the time. It was during their prayers that they were attacked by a group of small, horrible green-skinned creatures bearing rusted swords and shields that looked as if they were made of stretched skins.

The creatures, of course, were goblins. They attacked the priests and slaughtered them...except for Thomas. Once they had finished their bloody work, the goblins disappeared back into the barrow, and presumably went back down the shaft to the depths from whence they came. And, of course, it seems none of the others on the archaeological dig team had ever come back up from below...

His story complete, Thomas then asked that one of the party escort him back to Castle Westguard. The party, as a whole, told him that wasn't going to happen, because they needed to find the rest of the archaeological team. Thomas balked at that, but before he could continue to argue, the gibbering voices of goblins once again boiled out of the dark entrance to the barrow...