Have I mentioned that I love Robotech?

Note: If you can relate to this post, please comment below! I'd love to hear stories of your own Robotech nostalgia!
When I was a young teen, there was no Internet, no Netflix, no DVR. Heck, there were no DVD players. I guess there was laser disc. But there were VCRs. However, those things were clunky and not easy to program. And even if you programmed the damn thing, someone else in the house was going to mess things up. Because, you know, you're a kid. People don't respect your right to see your friggin' shows.
No, when I was a mere lad, there was none of the futuristic entertainment technology we take for granted today. Therefore, all TV was pretty much "appointment TV." Meaning, you got in front of that tube, or you didn't. And if you didn't, you missed that show you so desperately wanted to see. Too bad, so sad. Here's a tiny violin, playing just for you.
I'm about to get all "back in my day" right about now. Seriously, the kids these days (heh, I actually wrote that) don't know what it's like to be at the whim of the TV overlords. Nowadays, TV is all about "on-demand," of course. Now, we are the new rulers of our entertainment destiny.
But that's not what I had as a kid. Nope. As a kid, I had to book it home after school to catch the shows I loved.
One of those shows was Robotech. I loved the hell out of that show as a kid. I discovered the series at a tender young age, somewhere in the mid-80s. Robotech was something "new" back in the day. It was called "Japanimation" at the time, not anime. Wow, that sounds weird now. And maybe racist?
Anyway, there were only two times of day that Robotech came on back then. During the week, one channel showed it at 6 AM and 3 PM. Kid-me thought 6 AM was an ungodly time when no decent, sane person should be awake. And, school got out at 3 PM. You see my dilemma?
So, that school bell would ring, and I would force my chubby body to run as much as possible across town so that I could catch as much of the show as I could. I remember running through freezing cold, slipping on ice in my haste. I remember running through sweltering heat, until I arrived at home, chest heaving like a bellows and sweat pouring off of me.
I usually caught about 20 minutes of the show on a good day. But those were precious moments that made a huge impact on the burgeoning sci-fi fan in me.
On those rare serendipitous occasions when I actually got an episode on tape, I watched the hell out of it. Over and over, in awe of the sci-fi action, the giant robots battling, and the soap opera of the relationships between the characters. I mean, the show had a race of space giants that were as entranced as I was by the thought of kissing a girl. How could I not relate? How could I not love this show?
As time went on, as things happen, my interests moved on to other shows. I became absorbed with other pastimes, such as roleplaying of course. But my love of Robotech remained, lingering within me, and manifesting in an abiding passion for giant robots and space opera.
I even tried, once, to combine my love of roleplaying with Robotech. I bought a couple of the Robotech roleplaying books pumped out by Palladium...but never played the game. One of my big roleplaying regrets.
Recently, Robotech has made a resurgence in my mind. And, of course, I turned to the miracles of modern connectivity, and quickly found a certain 20-disc set. I bought it for a song. A gateway to hours upon hours of Robotech goodness that I never could have imagined as a kid! 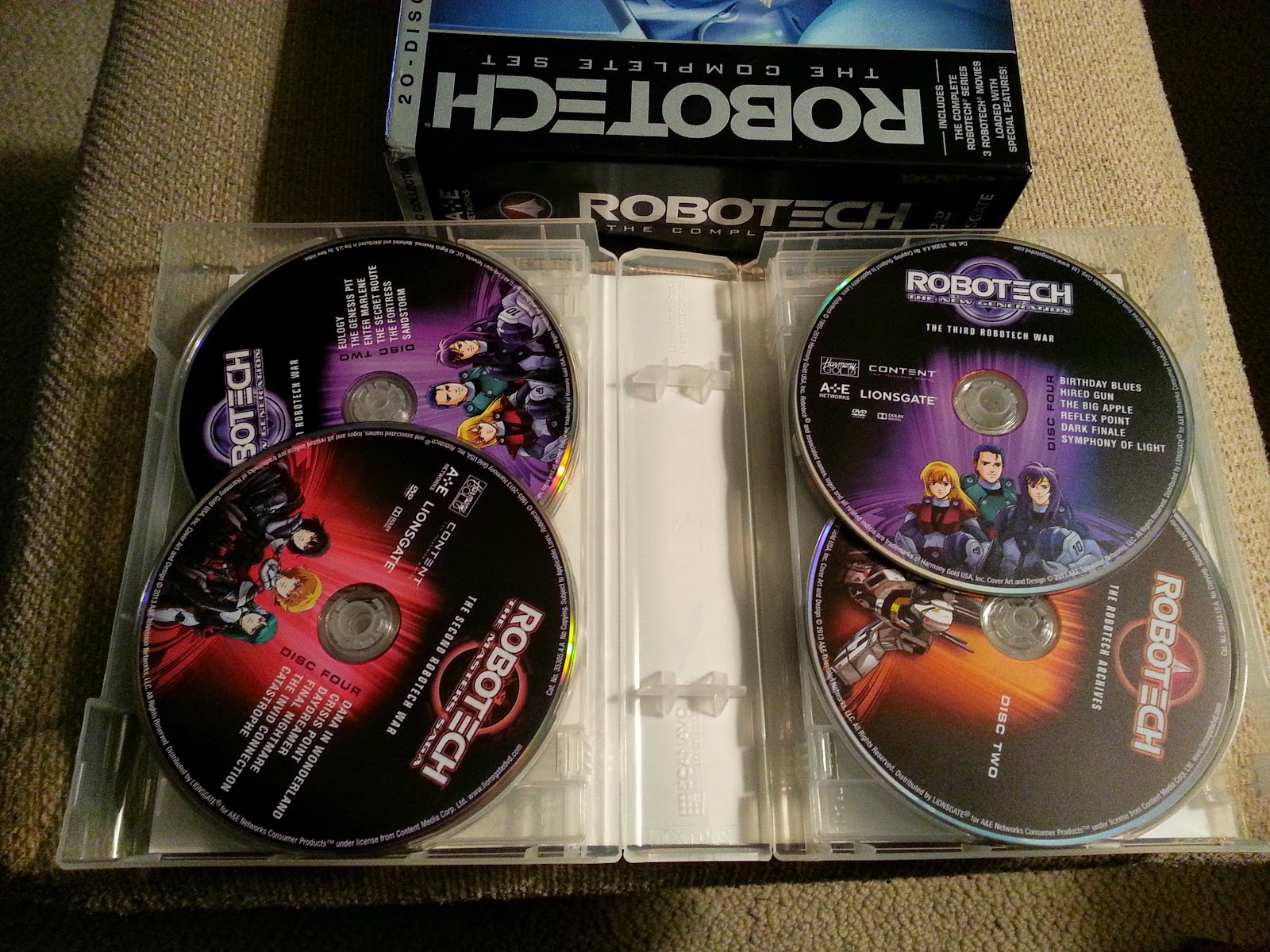 I'm about to embark once again on a voyage into a space epic, one that will no doubt take me through time AND space. I give a nod to kid-me, to let him know that it's time to come home and enjoy one of his favorite shows in a way he never could. On his own terms, finally.
Come with me, young man. We have places to go, giant robots to pilot, and space ladies to woo! 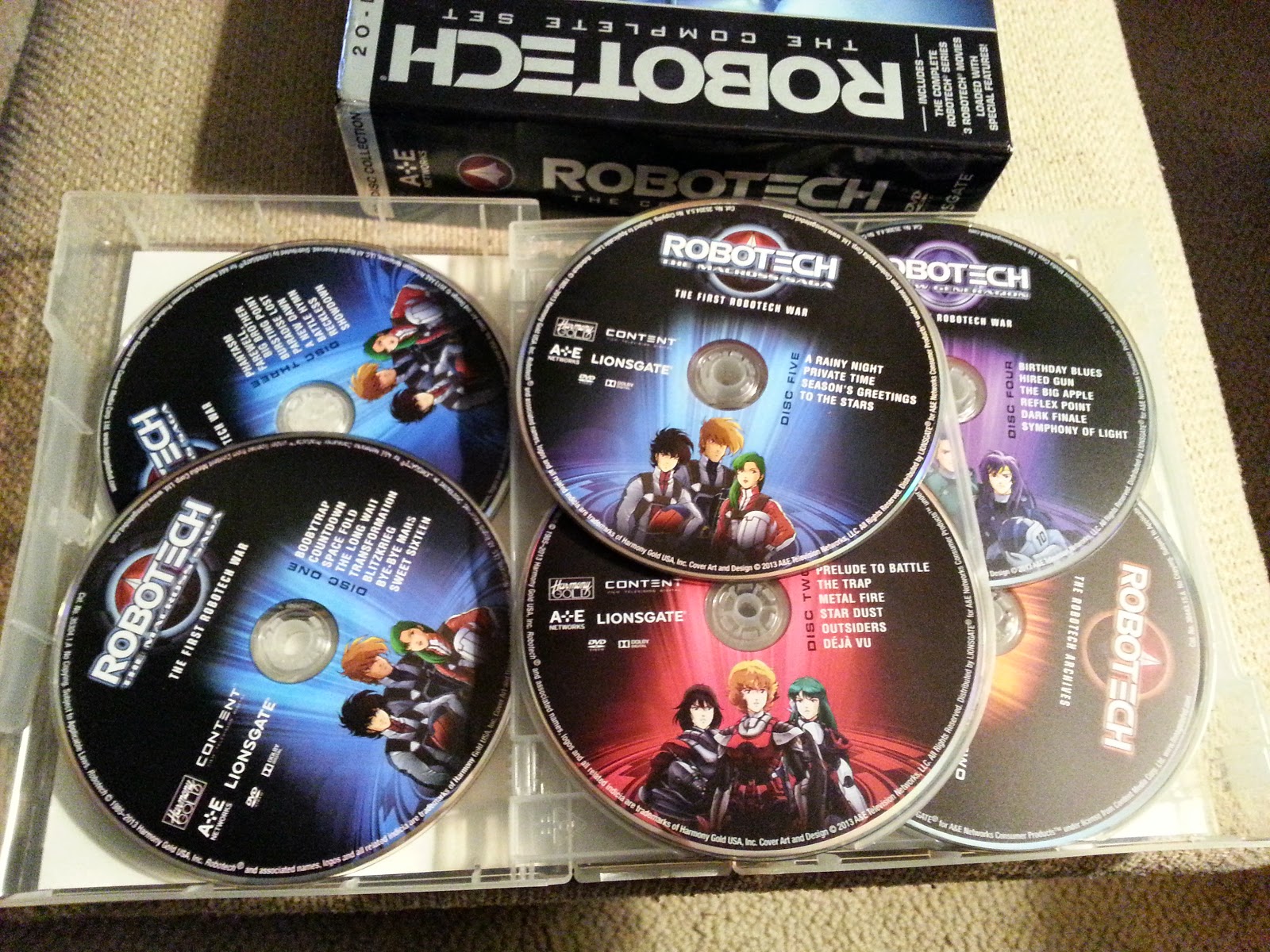 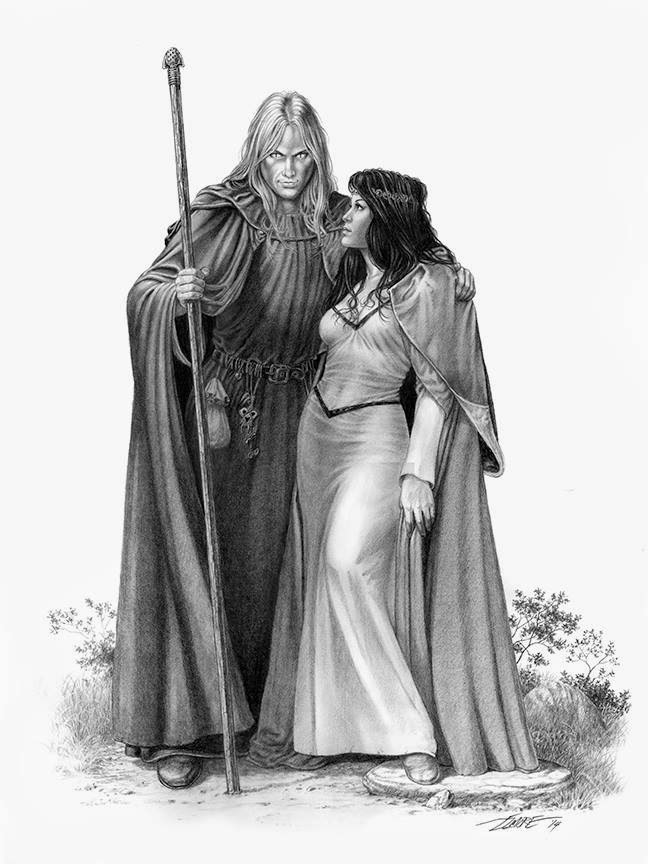