To one and all, hope you have a happy new year, and that you are all safe and merry in whatever place you call home. Thanks for a great year in roleplaying, and here's to another one ahead!
﻿
Posted at 9:31 PM 0 comments

Joyous Winter Holidays to You! To all my gaming comrades out there, may you and yours have a happy holiday season! Here's to the year of gaming behind us, and to the gaming in the year to come!
Posted at 1:53 PM 2 comments

Player Bill (running his Lathanderite cleric Oisin and Player Pam’s elven ranger Kale) and Player Jamie (running his rogue Milo) were in attendance for this session, in which we saw what happened in the aftermath of the skirmish with the elves of the Autumn Blade clan. After tending to the wounded and checking the dead, attentions turned to an Autumn Blade prisoner that had been trapped in the wizard Keseim’s web spell (by the way, Player Wes wasn’t at the session, so Keseim had conveniently been hit by an arrow coated with sleep-inducing toxins, and thus snoozed through the session).


After a somewhat lengthy debate between Oisin and Milo on how to question the prisoner (the conversation between a cleric of a lawful god and a rogue was, of course, a highlight of the session), they seemed to settle on the old “good cleric, bad rogue” routine. However, this seemed to degenerate in Milo taking over most of the questioning process. Oisin wanted no part in Milo’s increasingly, um, “persuasive” tactics. Said tactics included threatening the elf (who gave his name as Elashar) with climbing gear, namely pitons and hammer. As the questioning progressed (with Milo trying to pry information about the Autumn Blade’s intentions, movement, and numbers from the captive) and Elashar remaining tight-lipped and mocking, Milo drove pitons through the toes of elf’s boots, narrowly missing toes. While all this was going on, Oisin joined Kale and the other Daughters of Mielikki with the group (Rel and Karis) on a walk around the camp’s perimeter, to keep an eye out for another assault by the Autumn Blades.
Meanwhile, Milo’s questioning was whipping the Spring Dawn warriors into a frenzy of blood lust and revenge. The Autumn Blades, after all, had been bitter enemies of the Spring Dawn clan for many years. Milo finally became so frustrated with the prisoner that he suddenly insisted on fighting Elashar one-on-one. The elf was untied, and what followed was a down-and-dirty fist fight in a circle of cheering elven warriors. The combatants exchanged blows, while the crowd shouted and rooted for Milo to beat the Autumn Blade to a pulp.


All of this commotion soon attracted unwanted attention, however. As the fight progressed, Kale and her fellow rangers were the first to hear distant crashings through the trees. Eventually, an ettin, two heads grinning wickedly and wielding a large club, came barreling into the camp. The freakish giant smashed a couple of elven warriors with his massive weapon before the elves began to fight back.
Despite the new threat, Milo and Elashar continued their duel. Not long after the appearance of the first ettin, a second ettin appeared from the trees to cause more havoc. Despite the surprise and ferocity of the ettin attack, Oisin and Kale (along with the other Daughters of Mielikki and the elven warriors) led the group in overcoming the giants.


Around the time the second ettin attacked the group, Elashar began to back away from the contest with Milo, trying for a fighting retreat of sorts. Milo tried to snare him with a grappling hook (one of the rogue’s favorite tricks) but the elf was too nimble. Then Milo hurried to catch up with the Autumn Blade, but just as he did so an arrow suddenly protruded from the elf’s shoulder. As Elashar slumped into Milo’s chest, the rogue looked up to see yet another elf step from the trees. This newcomer, who had shot Elashar with the bow she held in her hand, wore a cloak pinned at the shoulder with a silver brooch worked into the image of a sun rising behind a blade of grass.
To be continued…
Posted at 3:38 PM 0 comments 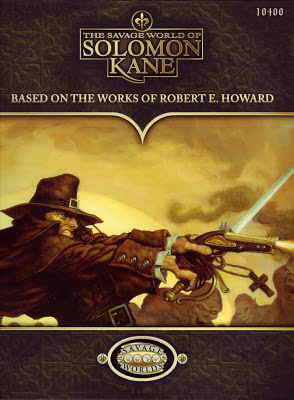 It was all-in-all a great night! I was glad to finally get into Savage Worlds to see what all the fuss was about. I was pleasantly surprised with the system, and I am definitely interested in Bill running some more Solomon Kane when we need to take a break (or are forced to take a break) from my campaign.
Posted at 10:58 AM 4 comments


(The Wednesday Night C&C group at All Things Fun hasn't met in about three weeks, due to Thanksgiving as well as some conflicts in my schedule. Therefore, we haven't had a session of my campaign for a few weeks. I'm definitely suffering from RPG withdrawal! I sort of expected this time of year to slow us down, but I've used the time to keep planning all sorts of diabolical stuff for my players to encounter. At any rate, session 11 was pretty intense. Read on below...)

At the end of the last session, the party had reunited with elven ranger Kale's wood elf clan. Her people were still migrating westward through the High Forest, with the goal of getting away from the recent depridations of undead humanoids. Kale, along with Lathanderite cleric Oisin, human wizard Keseim, and Milo the rogue, found the clan was in a haggard state. Everywhere they looked, upon entering the temporary clan encampment, there could be seen worried and/or wounded elves.

They were reunited with Breonna, the leader of the elite rangers called the Daughters of Mielikki (of which Kale is a member) and the current (temporary) leader of the clan since the death of the former leader/voantir, Elaya. Breonna confirmed that the vo'an, being burdened with protecting the clan's non-combatants and the slow progress through the dense forest, was being harried by ambushes and hit-and-run attacks by their enemies, the elves of the Autumn Blade clan.

The party quickly decided to help the vo'an by creating a diversion. They selected volunteers from among the clan's warriors, ten healthy and five injured fighters. The injured fighters were to be a part of a plan to trick the Autumn Blades into attacking what would appear to be a weakened group of stragglers that would lag behind the rest of the vo'an. Also a part of the plan would be two other Daughters of Mielikki, Rel and Karis (good friends of Kale).

The next day the group began to set their plan into motion. Then, as the vo'an began to move again, the party's group began to slowly lag behind the main body of the vo'an, in the hopes of luring at least some of the Autumn Blades away from attacking the vo'an proper.

The party's group came to a halt, and they waited to see if any Autumn Blades would take the bait. Sure enough, it wasn't long before there was movement detected in the trees surrounding the group. Then, a pack of feral wolves leaped upon the party, and battle was joined. The group fought off the wolves for the most part, and the beasts retreated into the wood again. Then there came a volley of many arrows that slammed into the party's group. This was followed by at least a dozen Autumn Blade archers stepping into sight.

What followed was a pretty intense combat, aided by using Player Jamie's wet erase grid and our mix of paper minis (some I recently downloaded from the internet as well as a good number that came with the "Black Box" version of D&D that I've had lying around for ages...it was pretty cool to finally break those out for some gaming) as well as glass beads and even counters from Jamie's copy of the D&D 4E Monster Vault! The image at the top of this post was taken during the height of the action!

The battle was great, with our group's usual combination of great tactics, clever usage of spells (props to Keseim's player Wes!), and their skill in acting in concert and maximizing their class abilities (for instance, C&C rangers are pretty deadly, even at low levels).

The party and their allies fought off the Autumn Blades, who retreated into the wood after having a significant number of their people killed or wounded. That's where the session left off, with four of the party's elven warrior's killed.